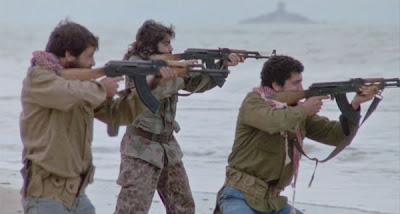 I work in a business where they sometimes send you to nasty places. I've been to some nasty places, and came back with a bump on the head and a tale of (now pleasingly dead) Congolese militias that would allow me to dine out for years if it hadn't actually given me a nervous breakdown.

To this end, my employers sent anyone who was going to visit a hazardous environment to the Hazardous Environments Course, in which you are sent to a large country estate for a week, and taught how to avoid getting killed TO DEATH by former members of Her Majesty's Special Forces.

We were taught first aid, map reading, how to avoid getting killed TO DEATH (Essentially: Don't be there in the first place; or if you are there, run away), and what happens when things get blown up. They demonstrated what happens when things get blown up an awful lot, mostly by gleefully blowing things up. The first aid course was a joy, one demonstration being the direct result of one first aider shooting the other in the kneecaps. Oh, how we laughed.

On the last day, the course climaxed with a field exercise, where we would pose as hapless field journalists and run around a field in Hampshire, trying not to get killed by bands of heavily-armed Special Forces posing as bandits.

So, there were were minutes later, captured by a band of heavily-armed Special Forces posing as bandits. I found myself kneeling, hands behind my head, as a man with a sub-Aleksandr Orlov accent pointed an AK47 at my vitals. It was at that exact moment that the 0945 Virgin Crosscountry train from Reading to Bournemouth should come to a halt at the red signal not twenty yards away.

I would, on behalf of Mad Dog Security Services, like to apologise to passengers for the sight that may have greeted them in this instance. To whit: my good self getting pistol-whipped by "Barking Mad" Andy, a man who possessed so many scars his face looked like a street map of London. A man in first class looked up from his Daily Telegraph. We made eye contact. He looked away.

The police did not come.

Then, the Special Forces loons hooded us, and marched us off to a wrecked farm-house, where we were left to reflect on our position. It was too much for some to bear.

"Can we have some music please?" is not a valid request in a hostage situation.

Then we were dragged out and shot.
Posted by Alistair Coleman at Friday, April 15, 2005