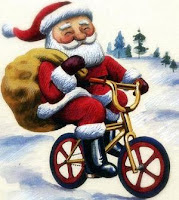 I never wanted a bike.

In fact, at the age of six, I already had a train set and the number one present on my Christmas list was more train, and perhaps something with bosoms.

Instead, I got a bike.

I cried. And parents, being what they are, interpreted my wails of "I don't want a bike!" as tears of joy.

I didn't want a bike. For a start, I didn't know how to ride one. My cunning plan from the year before of kidnapping large-breasted bikini-clad blondes and keep them tied up behind the bins was entirely conceived for one small boy on a tricycle. There was absolutely no way this plan was going to succeed on two wheels - with or without stabilisers.

Christmas morning was spent, then, trying, and generally failing in my attempts to learn to ride a bicycle.

The first time I got on, I pedalled like crazy and blazed along like a bat out of Hell. In a blind panic, I found myself at the other end of the street, mounting the kerb and falling flat on my face on a front lawn owned by two elderly lesbians, who glowered at me with man-hating distain through the blinds before returning to their festive tuppence-licking.

After a couple of hours fruitless thrashing about in which I managed to stay upright for about three seconds, I retired in disgust to the living room, where I watched my brother and sister cruising up and down the road on their brand new bikes.

A couple of hours later, after stuffing my face with Christmas dinner, half a bowl of nuts, cheesecake - frankly, my late mother made the best cheesecake in the world and I will fight any man that says otherwise - and an entire Cadbury's chocolate assortment, I was ready to face The Bike O' Doom all over again.

Belching slightly with the effort, I mounted my red steed, pushed off, and wobbled down the road. Easy.

After a short while, I was confident enough to ride around completely unaided, and even remembered to use the brakes nine times out of ten. Luckily, on the tenth occasion, a neighbour's car was there to halt me.

Now officially a cyclist, I felt brave enough to take the next step. All the other kids who sported brand-new Christmas bikes were already at the top of the hill and throwing themselves at enormous speed down our otherwise quiet little cul-de-sac.

I would, I decided, have a go myself.

I puffed my way to the top and looked back down the Crescent. It looked as steep as Hell and I was terrified. (In fact, I went back the last year on a Mirth and Woe-related fact-finding mission. It's hardly a hill at all, more a gentle slope. But to a six-year-old, it must have been massive)

No going back. I pushed off from the top of the hill, and whizzed down the road. With more luck than judgment, I negotiated the bend at the bottom, and pedalled like fury for the dead end at the far end of our crescent.

And, in the words of the well-known song:

I would have pulled on the brakes and brought myself to a smooth halt outside my house, but I ...err... forgot. I also completely forgot to stop pedalling. These are two straightforward acts that might seem entirely logical to you, but back then, Christmas Day 1972, my first time on two wheels, I was struck stupid by the sheer speed at which things were happening. Events would be left to run their course to their terrifying conclusion.

And the conclusion would be this: woe.

I roared past Casa Lesbos, past The Mad Orange Woman's house, past our front door, and gulped in terror as I sped towards the dead end, a driveway, and - looming before me - number 30.

The front door of number 30 swung open to reveal a man carrying out a rubbish bag filled - presumably - with Christmas wrapping paper.

"MWAAAAAAAAAAAAAAAAAARGH!" I screamed, as I headed straight towards him, and things went rapidly downhill (as it were) from there.

If I was terrified, and so was he. Spying a six-year-old tearaway on a bike bearing down on him, he flung his rubbish to the ground and fled for his life.

About a quarter of a second later, I rammed into the lovely, soft sackful of scrunched-up paper, and, as is usual in cases like this, Newton's Laws took hold.

I flew over the handlebars, and landed crumpled in a heap halfway up their hallway.

And, eventually and somewhat inevitably:

Luckily, I had already been turfed - somewhat uncharitably, given that this was the time of year to love-your-neighbour - out of their house and into the street, where rivers of rich, brown, tasty-gorgeous cheesecake-flavoured vomit could do far less damage.

Except, perhaps to the front wing of his 1969 Ford Cortina.

These days, the only connection I have with cycling is my entirely harmless saddle-sniffing hobby, but I still look back on that bike with more than a little fondness. I had some of my finest bone-jarring, head-cracking moments of woe on it; and it was my mode of escape from many, many acts of firey carnage.

It was a sad, sad day that I outgrew it, but come another Christmas Day, something large and yellow lurked next to the tree: A badly jaundiced Santa - with a new bike!


Need more woe? Rikaitch has it
Posted by Alistair Coleman at Friday, December 21, 2007