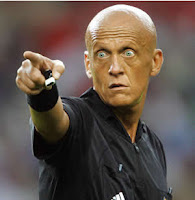 Exercise is for other people. It took me quite a while to learn this important fact in life and I wasted a lot of Sunday mornings in the company of other hungover idiots playing parks football for a team in Division 6 (East) of the Reading Sunday League.

I'm actually completely rubbish at football, so, relegated to the subs' bench, this usually amounted to running the line with a flag and getting, perhaps, ten minutes' worth of lurching about in front of exhausted opponents in a glorious 3-1 defeat to a bunch of ageing postmen.

In fact, not being a particularly fit specimen, about ten minutes was all I could manage, so it was an arrangement that suited me right down to the ground.

One of the highlights of a pulsating Division 6 (East) season was the away match at Mortimer West End, for the ground (in reality, a recently converted farmer's field) was next door to a rather excellent public house called the Royal Oak, which served some of the finest ales known to man.

One Sunday morning, we turned up to play West End in a League Cup match to find that the referee assigned to the game clearly straight out of school, had only just done the ref's course and had found himself officiating over this bunch of ne'er-do-wells on just about his first run-out with a whistle.

We found, at a very early stage, that this man in black was not exactly cut-out for a life of reffing.

The whistle would blow for a free kick, which would be met by the Sunday footballer's traditional protest: "You're 'avin' a laugh, ref!"

Instead of sticking to his guns, he would go "Right you are, then" and either wave play on or give a free-kick to the opposite team, who would echo the "You're 'avin' a laugh, ref!" mantra, leaving the poor lad utterly confused.

His authority already completely gone, the match took on a sort of free-form officiating where the man with the whistle was almost completely ignored.

OK, not quite ignored. Playing in a bit of a rural community, any punt up the left wing would sail over a hedge and into the field next door.

"Throw in Blues," said the ref.

And he did. Every time the ball went over the hedge to land amongst the cows next door, the referee shrugged apologetically, legged it off the pitch, through a hole in the hawthorns and lobbed the ball back to us. We would then carry on as if he wasn't there. And he wasn't. Our ref was the ballboy.

God knows what he put in his referee's report, but both teams marked him 9 out of 10.

In the end, we played "next goal wins it" after the second half lasted for the best part of an hour.

And then to the pub, where it turned out he was too young to be served.

That made little difference to the team piss-takers, for half an hour later:

THIS
Posted by Alistair Coleman at Friday, December 07, 2007