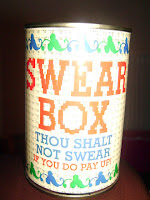 Why - in the name of cack-stained buggery - do these bloody spack-faced gits* think I need a bloody cock-knocking swear box?

Do they take me for some shit-headed melon-farming loud-mouthed bloody potty-mouth?

A bloody swear box, I ask ya.

Then, much later in the day, after I had calmed down, I took the boy Scaryduck Junior on his annual attempt to learn to ride a bike. He is eleven, and has found that life behind a PS2 handset has not actually prepared him for real life in the way that he might have hoped.

Confused by the lack of a handset with a triangle-shaped button, he crashed into Sandsfoot Castle - a scheduled Grade I listed building - for the second year in a row.

That's what he said to me. I don't know where he gets it from..

The bloody swear box is full.

* For comedy effect only. I must point out that my beloved family are NOT bloody spack-faced gits in any way whatsoever
Posted by Alistair Coleman at Thursday, December 27, 2007