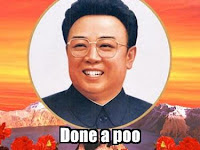 Lie or truth? Truth or lie? Can you tell which one is the porky?

b) I was once arrested for being sick on a policeman's foot, but was released without charge

c) I was briefly the presenter of a late night local radio programme until the people in charge realised that I was, in fact, shit

If you answered (b) to this question, you may give yourself a shiny, for - surprisingly - I have never been arrested. Not even for all that stuff I blew up, or the 35p rub-down lettering I pilfered from WH Smith's in 1983.

If you answered (c), then you are TEH KING OF WRONG. The local radio station being WNYC in New York, and I was so bad we didn't even make it to air. It all came as a bit of a relief, to be honest, as the show was slated for "late night" New York time, which meant arriving at the studio in Reading at one in the morning.

And if you answered (a), not only are you TEH KING OF WRONG, but also ARCHDUKE INCORRECT, with a year's subscription to I'm A Bit Thick Monthly, for you are reading the weblog of Captain S Duck (USAF) (Hon) (Ret'd).

I spent a lovely week (typhoon notwithstanding) taking salutes from grunts at Kadena Air Force Base on Okinawa whilst working there on a broadcast media survey of Chinese radio stations.

Alas, it was not a courtesy extended to me by the United States Army whilst conducting similar work at their Pyongtaek base the following week, where I was treated like some dreadful foreign spy who'd shit in their airing cupboard in the name of Kim Jong-Il given half the chance.

Anglo-American relations were strained to say the least, as this exchange illustrates:

"Please Corporal - could you escort me to the toilet again?"

That was the week I vowed to destroy the Yankee Imperialist Military-Industrial Complex. It's taking longer than I thought.

Now: For the purposes of blackmail, plz to tell surprising truths about yourself.
Posted by Alistair Coleman at Thursday, December 20, 2007