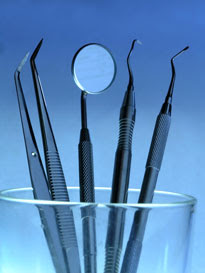 I have alluded, in the past, to an episode in my life where I have shamed myself in the offices of my charming, hardly-expensive-at-all NHS dentist.

In fact, past tellings haven't quite told the whole truth, for I have shamed myself on a number of occasions in dentists' offices, and only once have I been told to leave. This one, in fact.

It is time, I am afraid, to tell the full story of My Dentist Shame. With added bosoms.

You see, I had a complicated bit of dental work done in my teens, the result of which means I've got - to all intents and purposes - a dead tooth cemented in my mouth. It is grey, and a real turn-on for the ladies, because it makes me look AS NAILS.

After a few years it became complete agony. Despite being AS NAILS, it turns out I'm rubbish at the whole pain thing, and took myself back to the dentist to have it seen to.

It turned out that the gum behind the Tooth of Doom had become infected, and there were what appeared to be gallons of pus behind the horrible grey thing in my mouth.

"It's too complex for me," my charming dentist confessed, "you'll have to see Mrs Booth. She comes in on Fridays."

I came back on a Friday, where I was ushered in to see a very nice middle-aged dentist, who drilled through the dead tooth and slurped all the pus out. This took several appointments, which I rather looked forward to on account of her charming demeanour, witty conversation and her enormous bosom.

The eighth and ninth wonders of the world, all in a tight lab coat. Geek heaven.

According to Newtonian physics, everything has its own gravitational field. And so it proved the case with Mrs Booth's bosom. For every time she leaned over to insert something into my gob, they would stick to my head, rendering it impossible to see. Or in some cases, breathe.

Each and every Friday for a month, despite the terrifying drills and the industrial vacuum cleaner in my gob, I felt no pain. The pain disappeared almost immediately, and I lay there in an almost blissful trance, her enormous cleavage pressed against the side of my head.

"How's that feel?" she asked as I lay there, my world completely blacked out by the sudden eclipse.

Who knows how the male brain works? I was only supposed to nod my head to indicate I was fine. But no. Dr Freud took over.

She completed her work in stony silence, ramming the final filling home with what appeared to be a large chisel.

"Rinse and spit," she ordered, pointing out the plastic cup of poison pink stuff, "Now LEAVE."

She sent me to have my enamel scraped in the most painful way imaginable.

That was my final appointment.

Email ThisBlogThis!Share to TwitterShare to FacebookShare to Pinterest
Labels: big tits, dentists, neither mirth nor woe