On being led into temptation

On being led into temptation 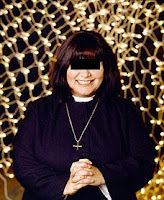 Sunday morning to our local place of worship, once again for reasons that escape me. Even filthy heathens such as myself need a little moral guidance every once in a while, and it is quite possibly the best free show in town. Particularly if you live in a very, very dull town.

I am surprised to find that Canon Harry has been fired (LOL)* and HOT CLERGY in the face of the Reverend Sue has been installed in his place, single-handedly putting the "KER-IST!" back into Christianity and the "Come on, big boy" into Communion.

Whatever your views on organised religion, you've got to admire the Anglican Church for their stance on appointing HOT CLERGY to positions of responsibility. For in the long term, it's going to encourage young, hormonal teens to shun the way of the hoodie and take singing up the church choir, just to harbour TEMPTED thoughts regarding Reverend Sue's behind, whilst developing Hairy Psalms.

But back to the chase...

Hymns were sung, tales of morality were spoke, and, at length, the believers shuffled to the front for a quaff of J.C's blood and a munch on one of His Holy Crackers.

Then, as proceedings reached a rowdy climax (the result of a fine bottle of Glenhoddle single malt finding its way to the front of the Communion Wine cupboard), Hot Reverend Sue calmed the masses with a call to prayer.

"And now," she purred, hotness dripping from her Holy mouth, "As we all kneel to say The Lord's Prayer, let us pause for a few seconds of quiet reflection..."

And we knelt on over-sized cushions, the pews forcing bodies into positions only previously experienced during games of Twister – the sport of SINNERS.

We all settled down - with much fidgeting – and set to contemplating the world we live in and life in general.

In one case, this also involved contemplating – in the cold of the church, the unexpected contortions and the sight of close-quarters HOT CLERGY - the set meal for six they experienced at the Rajpoot Tandoori the night before, which inevitably concluded thussly:

Not guilty, I merely knelt at the back and took notes.

We have been told to return next week with a candle and an orange. Things, I fear, are taking a turn for the filthy. You don't get this in the Catholics.

* May have actually retired, or been eaten by leopards. Why let actual truth get in the way of a low-quality gag?
Posted by Alistair Coleman at Wednesday, December 10, 2008