On The Liston-Smith Angry Scale to measure angriness

On The Liston-Smith Angry Scale to measure angriness 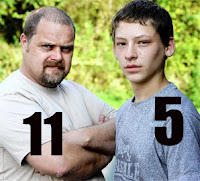 One of the great staples of television journalism is that of pushing a microphone into the face of an angry person – whose day has not improved since a local press photographer had them pointing at dog turds – and asking "How angry are you?"

The answer - invariably "very" – leaves the viewing public with no idea how angry they are. They might have an anger base line which is really quite angry, and the events on which they are quizzed might have made them only slightly more angry. Or, in rare cases, actually less angry than when they started but still not entirely happy.

So, the finest minds of our generation have come up with the handy Liston-Smith Angry Scale to measure angriness.

Now, when asked the question "How angry are you?" the interviewee can now reply in measured, yet dark tones "Eleven. I am eleven angry" and everybody will know you are celebrity bunny-boiler Katie Price.

And, added by popular demand by people who know

Those with an interest in such things will note that the Liston-Smith scale is modelled on the already existing Beaufort Scale for measuring wind speeds, with "Angry" appearing at Force Eight, where gale force winds would otherwise appear.

When approached with this news, the Met Office were said to be "Force Three Angry – Miffed".
Posted by Alistair Coleman at Monday, November 23, 2009

I'd forgotten about that!

Strange what Google turns up when you're looking for something completely different!