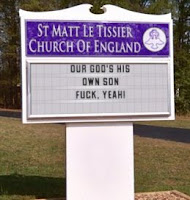 The Church of England, I read, is suffering from a bit of an identity crisis.

So much so that one of its bishops recently stated that the church 'shouldn't try to convert Marks and Spencer customers', but should instead be working to attract the easily-converted masses seen drooling in the aisles of low-rent supermarkets such as Aldi and Lidl.

It is clear that the one thing organised religion needs is new brains to wash, and what better way of getting hold of them than through the drug-addled world of corporate advertising?

With new rules allowing advertisers to directly attack their competitors, and to do just about anything short of crapping through their letterboxes (it being the only language these curs understand), the way is clear for your local church to engage in a Holy War to poach knee-benders from the heathen house of blasphemy down the road.

Bearing in mind that four-letter abuse is the new black, let's get a few slogans together to help our robed betters get ahead in advertising and promote the virtues of the invisible sky zombie. As a self-confessed deity-curious atheist and serial BLASPHEMER, I feel it is nothing short of my duty:

- I can't believe it's not Buddha

- Catholics! Double your chance of a date. We've got altar girls as well!

- Atheists! Free beer, money and sex for every new convert*
*May be a lie. We've got a book full of 'em

- Islamists! You bunch of part-timers. Brutally slaying unbelievers for 6,000 years, in ways that'll make your skin fall off like a heathen in a vat of boiling oil

- Jedis! Come to the Dark Side

And if that doesn't get them surging through the doors next Sunday, I'm afraid it's going to be Plan B. And frankly, the Women's Institute isn't going to be pleased.
Posted by Alistair Coleman at Thursday, November 12, 2009