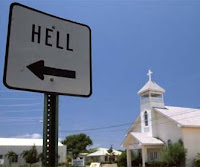 The more excellent among you may have heard me recount this tale on Radio Five's Danny Baker Show last Saturday morning. This is the full version which I planned to read out had I managed to get a word in...

Bad drivers? Don't talk to me about bad drivers!

Let me recount my trip into an actual circle of HELL. This being, as you might have already guessed, Manchester.

For reasons far too complicated to explain, I got hold of some tickets for a Man United match at Old Trafford. Away end only, you understand, supporting the poor saps who were about to get a lesson in football from the legions of darkness.

The catch being that we had to get up early and drive up from the south coast with a chap called Brian.

I'd never met him before - the whole deal was done through a mutual friend called Geoff - and he trolled up in his Ford Fiesta and we set off, him driving, me reading the map, Geoff in the back offering bad advice.

It was as we headed north that he admitted after covering only about 20 miles in the first hour: "I don't drive on motorways."

He wasn't particularly good at A-roads, either. Or taking my directions, all of which he patently ignored.

I should have noticed this on account of his devious plan of ignoring all road signs that said "M5 NORTH", veering off in the opposite direction as if they were sending his beloved Fiesta over a cliff.

"Turn left here," I said as Banbury disappeared very slowly in the rear-view mirror, followed by a desperate "Left... LEFT... LEFT!!!!!" as he turned right, anticipating a short-cut that would eventually resolve itself Northampton.

At three o'clock switched off the engine, got out and stretched his legs before declaring: "This is close enough."

We were alone in a car park.

A church car park in Coventry.

We had missed Old Trafford by a piffling 82 miles, and we turned round and headed back to Dorset.

We should be home in a couple of weeks.
Posted by Alistair Coleman at Friday, November 20, 2009

Email ThisBlogThis!Share to TwitterShare to FacebookShare to Pinterest
Labels: danny baker, Hell, neither mirth nor woe