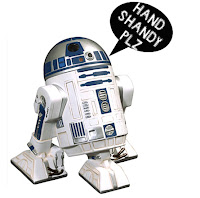 Or Lordy! It's another bucket of FACTS - all 100 per cent TRUE FACTS about the galaxy's favourite movie series (and, as it turns out, gay icon). Who knew? Don't look at me, I'm just reporting the truth.

10. Popular droid and gay icon C3P0 is to be replaced in future episodes of the space saga by C4P0, who comes with a 14-inch groin attachment and realistic orifices. He also speaks all known languages, including Danish

9. Unseen footage of popular heroine and gay icon Princess Leia shows that the rebel leader's public hair is styled in her trademark "double bun". The same footage also reveals Jabba the Hutt's groin to be shaped like a shed

8. Popular villain and gay icon Darth "Geoff" Vader was based on former England opening batsman Geoffrey Boycott, who is not a gay icon by any stretch of the imagination

7. The original concept drawings for the Imperial Empire's super-weapon showed there were to be two planet-killing space stations to be called the "Death Bosoms", which were to be destroyed by popular hero and gay icon Luke Skywalker exploding his torpedo between them

4. Such is his command of the force, Jedi Knight and gay icon Obi Wan Kenobi is able to poo out of anybody's bottom

3. Disappointed at being named as the worst character in the Star Wars franchise, annoyance and gay icon Jar Jar Binks is to relaunch his career starring alongside Eddie Murphy in Beverly Hills Cop XXVII

2. Film mogul and non-gay icon George Lucas will continue to churn out new versions of existing Star Wars product right up to the moment medical science allows him to buy a neck

1. Thanks to a dreadful mis-hearing at a concept meeting, 20th Century Fox was forced to junk millions of dollars worth of footage of the cartoon spin-off and gay icon Star Wars: Clown Wars

Bonus FACT: Popular droid and gay icon R2-D2 was originally created as a wanking machine in 1976 sci-fi scud movie "Star Whores". His scenes were dropped, but George Lucas liked the happy finish so much, the rest is cinematic history. Lucas also pulled the name "Hand Solo" from the same flick

Bonus Bonus FACT: The original ending to the movie series had hero and gay icon Luke Skywalker turning to the Dark Side and becoming the Imperial Empire's number one gay icon and wanking machine salesman
Posted by Alistair Coleman at Wednesday, November 18, 2009