The battle between man and inanimate object: IT HAS BEGUN 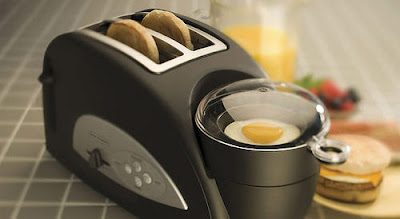 On reflection, shouting "Get into the toaster, you bready fuck", was neither going to improve the situation, nor was it the ideal start to the day. In the end, my threats came to naught, as the bread fell into the toaster, thanks to the miracles of this new-fangled "gravity".

I dare say that we have all, at some stage or another, been taunted by inanimate objects, and we have all retaliated by setting about them in acts of wanton and unnecessary vengeance. After all, I have dined out for years on the fact that I once threw a copy of the Da Vinci Code from a speeding train, killing it completely TO DEATH on account of the crapness printed on its pages. Take that, book, you useless paper BUMDER.

One may claim to be a rational human being, but there is nothing like the catharsis of beating something to smithereens because it has utterly failed in the simple task which it has been set. Very few experiences beat that satisfying crunch of dead vacuum cleaner on concrete, after it has been hurled from a second floor window following a tragic loss of suction; or the accidental shooting to death of a television after years of faithful service.

However, for sheer rage, my complete destruction of a desktop PC takes some beating, after a fatal disc crash led to the irreversible loss of years worth of data.

And it was a very big hammer, as I channelled my inner Basil Fawlty and gave it a damn good thrashing that it wouldn't forget in a hurry, if the thing still had a functioning hard drive. Which it didn't.

Then, possessing a strong social conscience (the littering of railway embankments with Dan Brown novels notwithstanding), I took what remained to the local recycling centre, in a single carrier bag.

The kind of very small carrier bag you only get in the "Six items or fewer" till at the supermarket.

There used to be a "Six items or less" till at the supermarket, but that fell victim to an unfortunate hammer attack in a completely unrelated Grammar Police incident of which we no longer speak.
Posted by Alistair Coleman at Friday, March 16, 2012