It's another day trip with Supreme Leader of the Workers' Party of Korea Kim Jong-Un, things are getting a bit dull with the endless round of pointing at things in the middle distance, and you know how these things go... 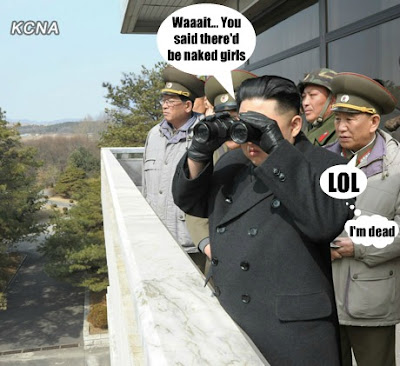 One minute you think trying out the old "Boot polish round the binocluar eye-pieces" gag on the boss will be the funniest joke in the world, then - too late - you realise he's in a bad mood because he got to McDonald's five minutes after they stopped service breakfast, and they wouldn't let him have an Egg McMuffin, even though they still had some left. 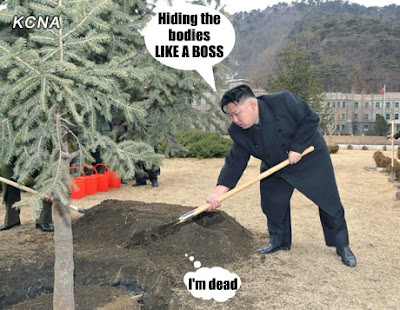 Luckily The Young General has a sense of humour after all 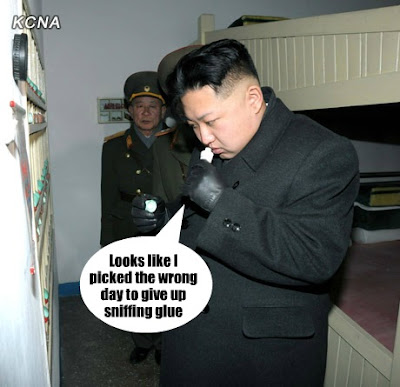 Happily, in lieu of the now-forgotten Egg McMuffin, the Leader of the Glorious Songun Revolution contemplates the crushing of the Thrice-Cursed Lee Myung-Bak Cabal of Traitors and Puppets in Seoul with a little something he found in the stationery cupboard 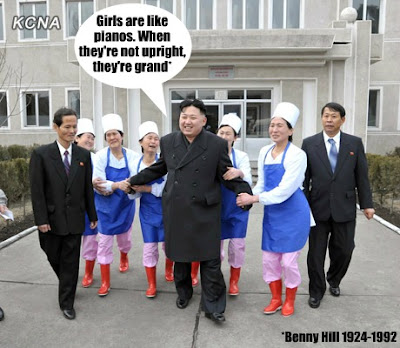 And then back to the TV studios where The Supreme Commander of the Korean People's Army finally gets to launch his pet project: A remake of the classic Benny Hill Show, starring Kim Jong-un and a bevy of busty beauties, worth a thousand enemy, their chests bursting with patriotic pride as Yakety Sax plays in the background.

And home to bed.