On the glamour, smoke and mirrors of live television 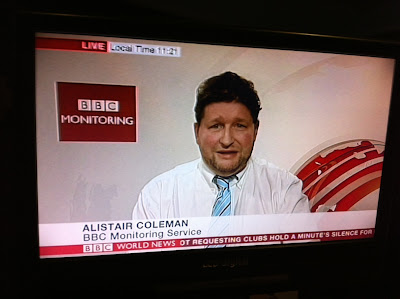 As you can see from this photo, I made my live television debut yesterday, speaking as official rabbit-in-the-headlights and expert on North Korea.

For some reason, I'm increasingly in demand on radio, TV and live speaking, and I was delighted to read a Twitter response to my recent Radio 4 interview where I was described as "the baying jackal of the BBC". That's going on my CV.

- Wearing a shirt and tie to work. My usual work wear is the Joy Division T-shirt and hoodie combination, so this is A Big Step In Being A Grown Up. There is no make-up person, so that is indeed my natural under-a-pair-of-studio-lights-in-an-enclosed-space rosy glow

- Having to change the BBC South backdrop for the BBC Monitoring one. Sounds easy, but they're all heavy heavy wood and fragile fragile plastic which means you need a cast of thousands in a confined space to move them

- As with all of television, everything is held together by duct tape. The chair, the desk, the microphone, the studio lights. Except the studio clock, which is held in place, by chewing gum and an open defiance of gravity.


Then you go live and there follows two minutes of terror hoping the presenter (who you cannot see) doesn't go too-far off piste with the questions, and you're free. Except for: "Can you do another one at four this afternoon?"

And you're pleased because you came through without breaking the golden rule: Don't swear, and don't set the studio on fire

In summary: Held together by string and sellotape, terrifying, hot.

BUT: THE GLAMOUR!
Posted by Alistair Coleman at Wednesday, April 10, 2013

Email ThisBlogThis!Share to TwitterShare to FacebookShare to Pinterest
Labels: being on television, rampant self promotion

Argh you're talking at SitP *tonight* and you didn't think to mention it before now?

Ditto what Look Away Now said...

At least there's enough time left to wish you the best of luck.

I hope there'll be an audio and/or visual recording of your talk at SitP so we can listen to it later on.

How did people hear/view your talk re NK via BBC Monitoring?

Very poor screen cleaning. Look at all of the wipe marks.

All: The date's wrong on the Skeptics talk: It's May 29th

I was shocked and sad to learn from your Twitter account that you spent last night in hospital with chest pains and that you are feeling so very tired.

Surely you are working too hard and need to get some good rest. Please Alistair take good care of yourself and get well soon x

So, it isn't a Stanford Institute for Theoretical Physics talk?
I was looking forward to your critique of the book "How To Teach Your Dog Quantum Theory".

Did you cock-off by leaving the (har har) studio with your mic still attached? Like I never did. Honest...