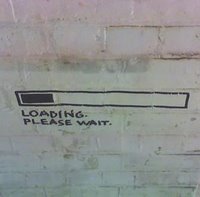 Long-time readers will remember the time I was dobbed in to my junior school headmaster and soundly thrashed for writing the word "PiSS" in soap on the mirror of the boys' toilets. It was a fair cop and society was entirely to blame, mainly for failing to tell me that writing "PiSS" on a mirror in soap was, indeed, outside of accepted moral and ethical standards that we live by. My arse glowed for several hours, and I consider myself lucky to have learned my lesson so early on.

OK, so I did go through a phase - aided and abetted by a younger brother who gave me a box of chalks and a set of felt tips for Christmas, graffiti for the purpose of - of writing "Arsenal Gooners kick to kill" in toilet cubicles at motorway service stations.

And then there was the business of writing "except Slough" on those stickers in train toilets that tell you not to flush the toilet when standing in a station, but I'm over that now. Just don't get me and a pen together in a public convenience, I'll only do something I might be ashamed of. Still, it beats cottaging, and hurts less.

But! This story is not about me (for a change). It is about the lovely, svelte Mrs Duck.

Mrs Duck went through a hard time in her early teens. He family moved from one part of Reading to a new estate on the edge of town when she was about twelve years old. This meant a whole new school in a less than desirable neighbourhood. A girls' school, packed to the gills with the shrieking harpy offspring of the local mouthbreathers.

In fact, said school has changed its name twice in recent years to escape the shame of damning Ofsted reports, pointing out it was one of the first educational establishments in the country to have its own crèche. That kind of school. And coming in as an outsider into the second year from the other side of town didn't make for a happy childhood.

Highlights of her years in this particular establishment included the time she and her sister were chased home by all 1,000 pupils (and some of the teachers), and something physically impossible involving a rubber tyre, which may yet appear in a later tale of mirth and woe.

So, it came as no surprise, one day, when she was led by the ear by an avenging deputy headmistress from the playground, to the shrieking delight of her classmates.

Dragged to a stairwell in the hovel of a building, the deputy head pointed to some fresh graffiti on the wall and demanded one thing of my future wife:

"What the bloody hell's this?"

"This. This foul scribbling on the wall. All this swearing. And we've warned you kids about fuckin' swearing in school how many times?"

"Ah ha!" she beamed in triumph, "You signed your name! Just wait until your parents get here. I've phoned them already, and they're LIVID. Your mother came to this school and I hated her too."

"That's enough of your excuses, you're in BIG trouble, my girl."

"But… I couldn't have written it."

"You couldn't? Why the devil not? You'll have a hell of a time trying to wriggle out of this one."

"If it had been me who wrote that…"

"I would have spelt my name right."

"Can I go now? What are you goin' to tell my parents?"

"And stop swearing miss. It's not clever"

God, she's wonderful. I had to say that, of course, she's got 'em both in a vice.