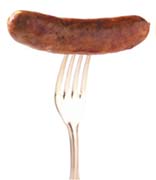 Kendo is my excellent father in law. He'll try anything once, like the time he took gliding lessons, and spent his entire time trying to dive bomb us as we ran, fleeing like mentals from the airfield.

He is, at heart, a family man who'd drop just about anything to help a family member, friend or neighbour. He also does a mean barbecue.

But not for Kendo an expensive shop-bought barbecue from the likes of B&Q, because, on top of all his excellent personal traits, Kendo is also the kind of chap who can build anything out of bits he finds lying in his shed. Several years ago, he brought my Austin Allegro back from the dead with pieces of a lawnmower and part of the washing line. He is also a cracking shot with an air rifle, so I had better watch what I say about him. Or his daughter.

There are times, however, when things don't go quite to plan. That's when Mrs Kendo comes in, for her job is to tell him so, with the immortal words "Oh Ken", the full stop to many of his misadventures.

Take the great Dee Road barbecue, for example. He had eschewed the usual practice of trotting down to the local DIY warehouse for all the bits, and gerry-built something out of some scrap metal he had lying about the place, left over from the construction of a fully functioning bar in his living room - the 'must have' feature of any 1970s home.

After a couple of hours trying to get the thing lit, and the sausages, burgers and meat from at least one named animal still resolutely pink on the grill, and the guests getting increasingly hungry, he found, like most back garden barbecues, the design fault that is inherent in charcoal. It doesn't light. Ever.

So, in his own words, he switched over to Plan B:

"It was a bit slow getting going, so I thought I'd use a Fairy Liquid bottle full of meths"

In fact, and we're talking advanced and possibly unlikely physics here. His giving the bottle a good, hard squeeze, actually sucked burning meths back into the bottle; where it found just the right mixture of fuel and oxygen to woof burning chemicals all over the shop. Especially when he gave it a good, panic-ridden second squeeze, which had much the same effect as a flamethrower.

This is his own explanation, dragged back over the years as that moment of horror drew itself out to last a lifetime. It all happened, you understand, in an instant, and you don't tend to stand around theorizing about the explosive tendencies of raw alcohol when your trousers are on fire, the conflagration licking up around the family jewels. It's all self preservation, particularly when somebody suggests stamping out the flames.

"Kendo!" said a helpful party guest, "Your trousers are on fire!"

"Never mind that," said Mrs Kendo, "Look at the fence!"

Yeah, never mind that, the fence was well alight, and concerned neighbours and guests were already turning the garden hose and a handy bucket onto the flames, before eventually soaking Kendo and his brand new Top Man jumper, bringing the party to an abrupt close.

It was a disaster. Kendo's Barbie was now a metal tray full of half-charred meat swimming around in grey water, tended by a man who appeared to have steam rising from his genitals.

"The sausages are all wet!" said Mrs Kendo unaware of her double entendre, and "Oh Ken!"

"The experiment was over," he said, ever the pragamatist, "We went down the chip shop."
Posted by Alistair Coleman at Friday, December 15, 2006