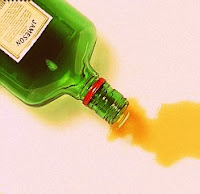 For one roller-coaster year of my life, I worked in the headquarters of a large motor parts company.

Things were going pretty badly for them as their main competitor went from strength-to-strength, leaving us floundering in their wake. Such was the rot, one of our outlets once reported a single sale in an entire week, when it should have been tens of thousands of pounds worth.

And carrying the can for this mess was Jerry the financial director, who was roundly blamed by many for paying more attention to chasing skirt rather than doing things that companies do to stay afloat, such as selling stuff.

"Ye Gods!" said Frank, whose role in the company was never quite made clear, "We're for the chop now."

Thankfully, neither myself nor Frank - who was a heavy-set man with spectacular facial hair, who liked to say "Ye Gods!" a lot - were sacked. Me for the reason that despite being the office Pimply-Faced Youth, I was one of only two people who knew how to operate the computer system; and Frank because he had the dirt on anybody of any consequence in the company.

As the sole survivor of The Great Disc Crash of 1986, which saw shards of ceramic computer disc still embedded in crucial parts of the air conditioning, I was to stay. Singled out as the only man with the financial clout to save the business, so was Frank, who had endured months of humiliation at the hands of Jerry.

There were tears, however, as half of the girls in the accounts department were culled, for there was simply not the work for them to do. Posts were trimmed throughout the company. And then the bombshell.

"And after fifteen years of service," said the MD, "I'm sad to say that Jerry will be leaving us."

The old man's face hardened. The room seemed to grow darker, the MD appeared to grow by several feet, while Jerry shrunk back into a corner as the finger of blame finally found its target: "Leaving us with immediate effect".

So, after he left the company's offices for the last time - given all of two minutes' notice - I drew the short straw to clear out his desk and arrange to have personal items sent to his home. Let's see:

* A large quantity of specialist gentlemen's leisure magazines, most with the word "Rubber" or "Latex" in the title

* The empty packing of a device called "The Intruder". Of The Intruder, there was no sign

* Half a bottle of whiskey

* His 'Little Black Book' containing brief details of every female in the building ("Julia, document archive: Bad tempered, great arse. 6 out of 10.")

* A series of polaroid photographs of both Jerry and numerous young ladies in various states of shiny undress, posed almost entirely across the huge table in the company boardroom

I could barely contain myself. I had to show somebody, and all I could see was Vera, ("Vera, office cleaner. Husband works away, randy as hell, MASSIVE tits") but that option would probably have seen me killed TO DEATH.

I gathered my spoils to my bosom, legged it down the corridor and dumped it all on Frank's desk, as he joyfully prepared to move into his new role, viz: saving our arses.

"Look what I found in Jerry's desk!"

Then, a pause as he examined the booty, then: "Ye Gods!"

"If you'd care to study this picture, I think they see that he is hung like a rhino."

We stuck it in a cardboard box and discussed what - if anything - we should do. Sadly the company didn't have a black museum, so we decided that honesty was to be the best policy.

"Scary," Frank said, a heart-warming look of a man of principle on his face, "Make sure this box finds its way back to the bosom of his family."

That Tuesday afternoon, knowing Jerry was down the Red Lion drowning his sorrows and/or eyeing up the barmaid with an eye to trying her out in something black and shiny, I drove the Box to his house in my Austin Allegro, rang the doorbell and fled.

In the rear-view mirror, I saw his harridan of a wife - who had made the Christmas Party a living Hell by managing to vomit on most of those attending like a scene from The Exorcist - open the door, see the box, and pick it up.

I dare say there was another Exorcist scene seconds later, but I was already far, far down the road.

"How'd it go?" Frank asked, as I finally showed my face back at the office.

"Ye Gods!", which, I think, is Frank-ese for "I love it when a plan comes together".
Posted by Alistair Coleman at Friday, November 14, 2008