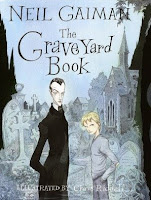 The sound of an Amazon parcel landing on my desk. It contains a copy of The Graveyard Book

by author, Hollywood mogul, greatest living Englishman and dispenser of invaluable shaving advice Neil Gaiman, a gift from one of my loyal readers.

Declaring immediately my interest in matters, viz: my months of pestering the charming Mr Gaiman until he wrote the foreword to my not-quite bestseller, it falls to me to drop everything (a pedestrian re-reading of Mr Tom Baker's hard-to-find autobiography

) and give it some sort of unbiased review.

Nope. Sorry. Can't do it. I've come over all fanboy instead.

Neil (I can call you Neil, can't I?) has the gift of storytelling. He can write equally well for children and adults; and better still, he produces children's books which adults actually want to read.

This, a homage to Kipling's Jungle book – only with more dead people and fewer talking bears – Gaiman's series of interlinked short stories tells the story of the orphan Nobody Owens, brought up – as a result of stabby consequence – in a graveyard by its metabolically challenged residents.

Each chapter sees the boy Bod another year older, discovering more secrets of the world in which he lives, before a reckoning with the murderous man Jack. Other reviews use the words "charming" and "bittersweet", and who am I to argue? Top-notch illustrations, designed, I am sure, to creep the hell out of the kids.

I find half my brain shouting "Kids' book! Kids' book!" as I turn the pages, while the younger, more sensible half is replying "Who cares?" as Gaiman blurs the boundaries between adult and junior literature rather more effectively – and five hundred pages shorter - than the forced chumminess of a JK Rowling doorstop.

Available at all good bookstores, quite a few rubbish ones and probably not at all in your local branch of Blacks Camping Equipment. Alternatively, if you're feeling lazy and/or tight, you can just sit back and let Mr Gaiman read the whole thing to you.

"So", I hear you ask, "How does Mr Fanboy Duck rate this? What's the damage?"

I cast my prejudices aside like a fading soap star abandons her clothing, and get out my best rating stick. Ranking this on the Scaryduckworth-Lewis Method of Rating Things for Excellence, The Graveyard Book comes in at a highly impressive:

18/20: Billie Piper riding a space-hopper down a cobbled street

And you can put that in the blurb for the paperback, Mr HarperCollins.

(And, also, Mr Gaiman, into the episode of Doctor Who you're not writing)
Posted by Alistair Coleman at Tuesday, November 04, 2008