On me me me ME ME

On me me me ME ME 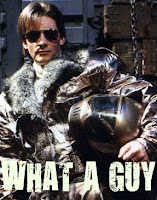 I appear to have grown a few extra readers on account of that whole award thing, so – thanks to a bit of prodding by the internet's Cliff Jones and TV's Mr Angry – it might be time to update the 100% truthful 'Who The Blummin' Hell Is This Asshat?' FAQ.

Besides, who better to talk about on here than The World's Most Excellent Person In The Universe, EVER?

Sadly, Ace Rimmer couldn't make it, so here are some things you should know about that Scaryduck chap instead:

1. This blog started on February 6th 2002, so that's seven years of my life gone that I won't see again. I took the leap from unfunny Arsenal fansite owner to unfunny blogger because TV's Wil Wheaton told me it would be "a blast". Stupid, excellent Wheaton.

2. I also owe a debt of thanks to radio's Danny Baker, the internet's Danny Kelly and TV news' Richard Lister for inadvertently encouraging me to write this stuff.

2-and-a-bit. I accidentally won the Guardian's best blog award several years ago. To avoid humiliation, and realising that I had already peaked, I volunteered to be on the voting panel the following year. I was the only panellist not to vote for that Belle de Jour bloke.

2-and-three-quarters. Dave de Jour got a bloody massive book contract and a TV series starring William 'Billie' Piper as Dave. I did not. I am not bitter about this AT ALL

3. TV's Anita Roddick said I was "a better writer than Jeffrey Archer". She is now dead.

4. TV's Lenny Henry said this site was "the best blog in the universe" and he is now crapping himself.

5. TV's Ricky Gervais is my mother-in-law's son-in-law's brother, or something. Which means he is either my sister or blogging deep, deep undercover somewhere in West London 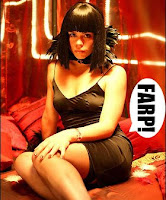 6. I am English, Welsh, Irish, Jewish and French with a Scottish name. I once walked into a bar and the landlord said "What is this? Some kind of joke?"

7. The once funny Scaryduck blog (© 'Spikes' Walker) has also been accidentally nominated for a number of national and international blogging awards (usually in the 'Weird Shit' category), but the author clearly didn't sleep with the right people.

8. I have a book that is EXCELLENT (and still available). I also have three half-finished book manuscripts and a half-finished pilot for a radio sitcom which are also EXCELLENT and would make a superb addition to the output of any top quality publishing house or large broadcasting organisation hem hem passing media types hem hem.

9. Yes, the stories on my site ARE true. Mostly.

Email ThisBlogThis!Share to TwitterShare to FacebookShare to Pinterest
Labels: Me me me me me