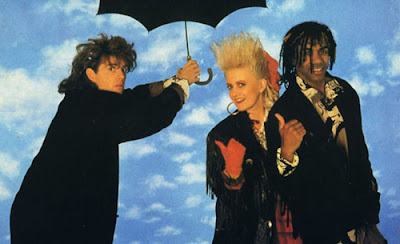 My pals at the Huffington Post recently ran a feature on misleading band names, pegged on the fact that Band of Horses do not feature a sinlge equine in their line-up.

All well and funny, but they scandalously named to miss out some of the most misleading band names in the history of popular music, an omission I seek to rectify with the following short list.

Prepare to be outraged by the nerve of these so-called musicians and their LIES.

Thompson Twins - Famously, there are three of them, none of whom are related or even called Thompson

Cocteau Twins - Again, three alleged twins, none of whom are the multiple birth progeny of the French poet

Orchestral Manoeuvres in the Dark - No orchestra, and every time I have seen them, I paid good money to watch a performance held - outrageously - under lights

Killing Joke - I once heard lead singer Jaz "No relation" Coleman tell a passable "knock knock"gag, and I am still pretty much alive

The Smiths - Putting aside the fact that no-one in this popular beat combo is actually called "Smith", there is a second lie in the fact that they will also refuse to shoe a horse or make a nice set of decorative railings

The Foo Fighters - I've said it before, and I'll say it again: Not a single penny raised by this band has gone toward fighting foo

Popular music: STOP LYING TO US

On a related note, I went to a record shop for the first time in ages recently and asked for something by The Cure. Imagine my disappointment when I got home and found it was a Placebo.
Posted by Alistair Coleman at Tuesday, November 20, 2012