Writing Masterclass: How to write the last sentence of a book 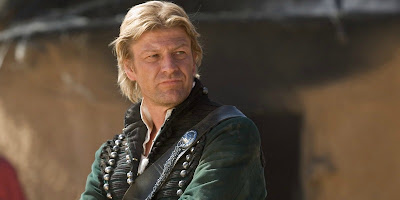 I'm slowly working my way through the Sharpe (oh-ho!) canon by Bernard Cornwell, the rollocking adventures of a solider in the King's army during the Napoleonic Wars. So far, so good, and just like Flashman, only with less cowardice and screwing, and you get to imagine Sharpe himself as Sean Bean in his only role where he doesn't get killed in the final reel.


And there's one thing I've noticed about all the Sharpe books I've read so far: Cornwell ensures that the last sentence is always "It was [BOOK TITLE]".


In Sharpe's Tiger, he shoe-horns in the sight of a tiger skin from an animal killed by the man himself (in self-defence). IT WAS SHARPE'S TIGER THE END.


In Sharpe's Triumph, he looks back at his heroic role in Wellington's first victory at the Battle of Assaye: IT WAS SHARPE'S TRIUMPH THE END, but could equally be a reference to a badly-parked car outside ther Iron Duke's headquarters.


In the forthcoming Sharpe's Bin, it's all about his struggle to dispose of used needles left behind by the regimental heroin addicts. "He finally got rid of them in a safe and secure manner. It was a SHARPS BIN."


But never mind old Sharpie. Other authors could take Cornwell's example and finish their books in this manner. Retrospectively, if necessary, even if the author is long dead.

JK Rowling: "Harry Potter hung up his hat and cape, knowing that he would only have a week or two in this new muggle's job. It was The Casual Vacancy".


Charles Dickens: "It wasn't just any time of year, Marley told his sister. It was a Christmas, Carol."


Leo Tolstoy: "After that, Bezukhov never forgot to wear his ear defenders on the battlefield. It was war, and peace."


George Orwell: "Winston Smith looked up in dismay as the youths took bites out of his chess piece. It was Nine teens ate e4."


Joseph Heller: "And, in a moment of Anglophile weakness, Yossarian finally revealed his favourite moment of the 1938 Ashes Series. It was Catch 22."


Stephen King: "Away and away he went, steering the craft further and further away from the Maine coastline. For now it was just him, and the lead singer of Motorhead's boat. He only had one thing on his mind. It was Sail Lemmy's Yacht."

Let's hear it for books!
Posted by Alistair Coleman at Wednesday, November 14, 2012