In the wake of last week's post on the Rainbow Bridge – that mawkish poem that does the rounds whenever a pet dies – I've a more disturbing trend to report.

For the uninitiated, this is what the Rainbow Bridge looks like, and I'm pretty certain you'll agree that it must be destroyed with hammers, fire, and bombs filled with rabies. 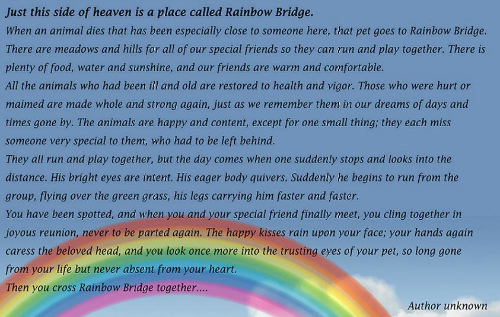 Now, because I'm (generally) a nice person, I follow an animal re-homing charity on the electric Facebook. As they deal in the main with older dogs, there are times that they have to announce the sad death of one of their charges. And so it happened the other day, and the Rainbow Bridge was rolled out along with the usual "run free, little man" guff you'd expect on these sad occasions as people hide behind euphemisms for life's inevitable ending.


And here's where is gets weird. Among the condolences was one account that actually welcomed the poor dead barker to the Rainbow Bridge.

Let that sink in for a minute. "We welcome you to the Rainbow Bridge." Oh yes.

On closer inspection this post turned out to be (draws breath, and you should too, because I'm going to capitalise and bold the rest of the sentence) the work of a Facebook Account Written In The First Person By The Owner Of a Dead Dog.

I'll say that again: Somebody ran a Facebook account for their dog, posting in the dog's voice, and when the dog died THEY KEPT DOING IT.

Dead Dog is – according to its previous owner – whooping it up on The Rainbow Bridge, welcoming other dead dogs to The Other Side, and posting a steady stream of those motivational photos and poems that make Facebook the largest collection of tasteless fridge magnets in the world.

THE DOG DIED AND THEY KEPT DOING IT.

I'm well aware there are grief and mental issues at play here, and these people are best left alone while they work things out.


BUT THE DOG DIED AND THEY KEPT DOING IT.

I just don't know what to think any more. 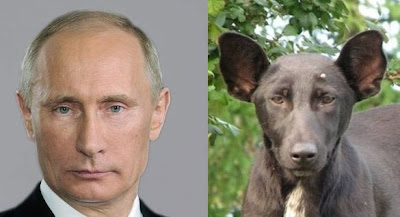 But never mind that. There's a dog that looks like Vladimir Putin.
Posted by Alistair Coleman at Friday, September 20, 2013

I want to know if my pet Madagascan hissing cockroaches are waiting for me on this side of the Rainbow Bridge. Will their little eyes light up and their antennae quiver when they see me approach? Will we journey over the bridge together, my little chitinous friends and I?

Or is it only for dogs?

Also, when I get to go across The Bridge, do I have to wade through a whole mass of skipping dogs who are waiting for their owners? Only I can't stand dogs.

Who cleans up all the shit on the other side of this bridge, then?

Isn't the Rainbow Bridge the one which Donner strikes out of the rock at the end of Das Rheingold?

Kaptain K: fancy bumping into you!

Nah - Putin's got the bigger ears.

My dead dog tells me it's ruffff on the other side...

The rainbow bridge scares me. Over the years I've had rabbits, guinea pigs and cats galore, when I get there are they all going to piley on? Eternal trampling by small animals and rodents, isn't that one of the circles of hell?

I went over the bridge to complain about the noise and had to get anti-rabies and anti-tetanus jabs at AE.

Is that dog actually Putin's? They say owners and their dogs can start to look alike, and those two are a dead spit.

Do dead lamp posts go over the rainbow bridge?

Years ago I ran across on the intertubes a website by an artist that offered to take your cremated dog's ashes and mix them in paint and then paint a portrait of dear doggie, for a fee of course. The website had a catchy and hilariously pun-ny title that I wish I could remember.

Gee where else would I run across a website but on the intertubes... oh my.

Amy, this http://www.memoriesfromashes.com/. might be what you were thinking of.

I loath the whole Rainbow Bridge thing. Last year when I had to have my cat euthenised (untreatable cancer) many well meaning people started whittering on about it. I am still at a point where I am unconfortable saying he died, I chose to end his life to avoid any more terrible pain and suffering. It was the right thing to do, but I made the decision.

It would seem to be the most disrespectfull thing to try and wrap up what happened in a 2nd rate cheesy platitude. I loved my cat and (like any good cats) tollerated that in a patient way. I did right by him to the end and it still breaks my heart.

CptnS, I don't know if that is the website. The title does not sound quite funny enough, or maybe I am more twisted these days so it looks tamer : ) When I had encountered the one I was referring to, I had gone back some wks. later to find it was gone.

The idea of ashes in the artwork sounds a little hokey to me but that is my opinion. Everyone has different tastes, that's for sure.

The Rainbow Bridge thing is loathsome, as well as the judgmental comments about pet ownership and the decisions one has to make.

Scary, your treatment of it is mahvelous, dahling, simply mahvelous.
And that dog does look like Putin.

Pond: You're too kind.

Also, I remember an HP Lovecraft horror story in which somebody boiled himself down into paint so he could live forever.

I'm sure I read somewhere about someone having the ashes of a dead relative mixed in to the ink of a tattoo they were having done. Now that is freaky.

I'm sure I read somewhere about someone having the ashes of a dead relative mixed in to the ink of a tattoo they were having done. Now that is freaky.

A facebook page by a dog? My goodness that's almost as bad as a blog written by a duck!