Why the Rainbow Bridge still has to be destroyed with fire 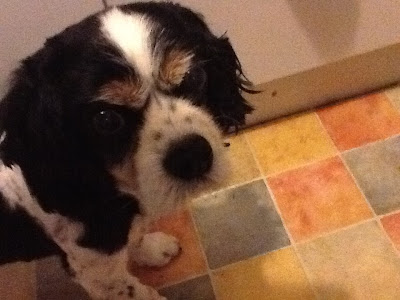 Earlier this year, amid the heartbreak of losing both of our dogs within a month, I posted on these pages gently asking well-meaning people to stop sending us the Rainbow Bridge poem.

For the uninitiated, the Rainbow Bridge is a badly-written piece of drivel that says that your dead pets are waiting for you in bountiful meadows at said bridge, where you'll both cross over into heaven. Some people, I have since learned, take this as gospel fact. Heavy on the gospel.

In certain circles "going to the Bridge" are a euphemism for your dog dying, and in the days after both Snowy and Charlie dying, they were told to "run free". Now, I saw poor Snowy lying on the vet's table, a sight that still haunts me, and he was doing precious little running that day.

So. The weirdest part is being assailed by judgmental religious types over my Rainbow Bridge put-down, having been told several times that I'm going to Hell. I'm not one to point out that my telling me this, they're doing their own religion wrong, but my message to these people is this:

I don't mind you being religious. However, I worship one fewer deity than you and I'm fine with that. I'm also not going to Hell, because I don't believe in that either.

And the Rainbow Bridge? IT DOESN'T EXIST. 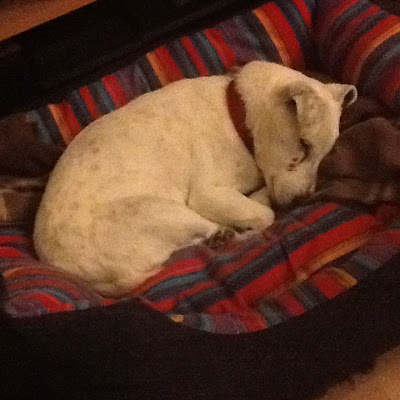 Now, I wouldn't be writing this post if it weren't for a recent comment under that particular blog post. The author makes a few points, but the one that hurt me the most was this:

"I feel sorry for their pets too. 2 dogs in 2 months? How does that happen? Hmmm"


I'll tell you how that happens.

We work with a charity that re-homes unwanted older dogs that would otherwise live out their last days in kennels, foster homes or even be destroyed.

Snowy was in his 18th year when old age finally caught up with him, and his poor heart simply gave up after a long illness.

Charlie came to us at the age of 12, and we had no idea he was already in the advanced stages of cancer. One day, soon after we lost Snowy, he was off his food. The next day he was dead.

It was like a kick in the stomach. I cried in the street. I cried on the phone to my daughter. We still miss Beanso today.

Anybody who says atheists have no compassion don't know anything about atheism. Anyone who suggests that something untoward happened to my beloved pets, isn't fit to lick the dog crap off my second best trainers. That's not me being anti-religious or lacking compassion.

That's me being human. 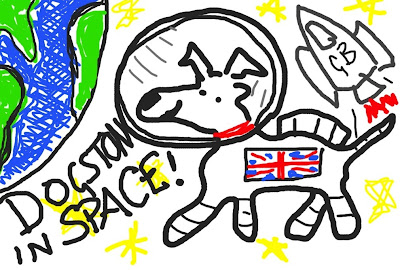 I'm sorry your pain has been compounded by these comments.

Some seem to be well-meaning idiots, forcing their views on you, but others seem to be true gits. I'm ashamed that some of them seem to be doing this in the name of religion.

I can only imagine the pain I will feel when my own beloved dogs have to be put down...

I guess what I'm trying to say is keep up adopting older dogs. They are *so* much more worth it than any jerk who'd question you losing two dogs in two months. Snowy and Charlie were loved and cared for in the time you had them. And that's what matters.

And I'm not a big fan of that poem, either.

Yes, Christians can be jerks. Our small boy was bewildered to be told by another child that we were all going to burn in hell because he hadn't been Christened. From a C of E family at that...

Any dog is better than an imaginary space-daddy and his cannibal zombie love-child.

This explains why I prefer dogs to most people. Dogs don't judge you and the only diety they beleive in is the one who fills the magic food bowl.

Oh, and why is it religious people thing that they have to judge you?

Surely their God will do that when you get to wherever, or do they think they know better than him?

Dogs should be sufficient proof to everybody that you don't need the promise of an afterlife to be good.

I am very sorry for your loss, and I thank you for a well-written essay.

So have any atheists accused you of animal cruelty....? No.....?
That could be be because we godless ones care more about the world and its inhabitants than the god-botherers do because we care about what we can see and touch, not a dream of 'eternal life'.
We don't need to believe in the forgiveness of God & Jesus because we try not to do harm in the first place.
And if we do harm then we have to live with that within our own personal morality which is far more unforgiving than any god.
Ignore the Rainbow Bridge nutters, they're not rational, just take solace in the fact that most of them will throw away hard earned money visiting psychics!

There are some total knobbers out there. And then there's the fool who made that nasty comment. Respect to you scary duck. That's no easy path to choose.

Rainbow Bridge? Please! What are we, twelve years old?

What happened to judge not lest ye be judged? That's supposed to be a top rule for god botherers.

Anyone who didn't understand why both dogs passed away so close together obviously doesn't read very well.

You and Jane are to be commended for adopting older dogs. It's much more work and the heartaches come so soon.

Sorry to tell you this, but driving home from Scotland in the rain this weekend, I saw literally DOZENS of rainbows all the way down the entire length of the country.

And there were loads of dead foxes and badgers at the side of the motorway too.

So, two and two together, mate.

Another reason Anonymous commenters are dicks

A ggod reason why I prefer animals to people.

One of my colleagues is a rainbow bridge nutter and when one of my pets passed away I was told "...but it's okay, they will come running towards you with all the other pets you have loved!"

Imagine their surprise when I replied "You know, I don't think Mr Fins the goldfish is gonna come galloping across a f****** field any time soon!"

Kaptain Von: Our problem is that all our pets - being Oldies - are pre-owned. Who's he going to run to? Am I going to have to fight previous owners? WHO DECIDES THESE THINGS?

I just hope there is a bunker at the rainbow bridge for me to dive into when all the angry chickens, cows and pigs that we munch into come charging.