A charming tale of love, loss, and, of course, dreadful, nut-strangling woe 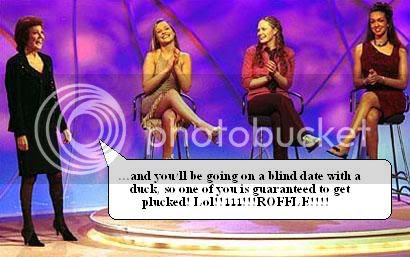 When I was at college, I went on a blind date. Woe.

I didn't want to go on a blind date, but Lisa insisted, and she was that kind of girl. And anyway, she knew this lovely young lady, who was just my cup of tea and we'd get on like a house on fire.

Anybody who has ever been on a blind date, organised by the kind of person whose entire life revolves around playing Cilla Black and organising blind dates for people will know, straight off, that Lisa was talking complete and utter bollocks. Desperate for any sort of action, I fell for her sales pitch hook, line and sinker.

Her name was Angela. She was in her early twenties, and she had a real-life job in an office that paid proper cash money. She was, said Lisa, desperate for a bloke. So desperate, in fact, she had agreed to go on a blind date with a nineteen-year-old idiot student who habitually wore a combat jacket. All the time. Lisa, obviously, sold me as some six foot Adonis on shore leave from the SBS.

What could possibly go wrong?

I've got this dreadful habit of arriving anywhere early. I build 'idiot time' into any journey, however short, that means I arrive anywhere on time. I'll arrive at airports four hours early for flights. Sit around waiting rooms for hours at a time because I travelled up on the 5am train. I've arrived at my one and only blind date ninety minutes early.

So, at the suggestion of the barman, I had a drink, or three.

Then, bang on time, an hour late, she arrived. I gasped. It was, truly, a lady. A lady of the female sex, who, if I played my cards right, might get the use of the rubber johnnie I'd been carrying around in my wallet for the previous two years. A former Boy Scout, it always paid to 'Be Prepared', and tonight, bingo! She had lady bumps and everything, and on the front of her body, too.

Noting the copy of 2000AD comic sitting on the table, so she'd recognise me, she came over in her lovely pink flowery dress, and perched on the rickety bar stool in front of me.

"Want a drink?" I asked, breaking the ice with the one thing in this world I truly understood: booze.

"Hunh?" she replied, and then our problems began.

She didn't understand I word I said. All evening.

Lisa, you see, had not told me one vital fact about my intended paramour. Angela was profoundly deaf, it turned out. She'd come down with some dreadful illness in her childhood, and it had completely wiped out her hearing. Fair play to her for not letting it get her down, but the fact that after all these years, she still hadn't mastered the art of lip-reading, and was only really comfortable in the company of other hearing-impaired people hadn't registered on Lisa.

Actually, it had. I had recently been the victim of a bizarre firing range accident only weeks beforehand. Helping out at the Air Cadets, somebody had discharged a rifle, with the loud, explody bit right next to my head just as I removed my ear defenders. Result: rendered completely deaf in my right ear for a week, and several years of tinnitus, that dreadful ringing that follows you around and eventually drives you mad. Lisa had assumed, then, that my partial, temporary deafness made me an ideal consort for poor, sweet, single, suffering Angela, and she shoe-horned us together with barely a thought.

Luckily, I had a notebook, and she a pen, and we spent a mildly diverting evening writing messages to each other on how we were going to murder Lisa to death when next we saw her.

"Cider, pls" she replied, and we got steadily pissed together.

She was actually super pleasant company, but all she wanted from life was be a presenter on "See Hear". All I wanted was to see a grown lady naked. And I was hardly the most sensitive person in the world in those days, so she probably escaped lightly.

The more we drank, the wilder our handwriting got, until we reached a point where even that as a means of communication failed.

As last orders were called, I tried my final gambit.

There was, I am sorry to say, a brief, utterly sexist mime.

Turned down again. And, in her cidered-up state she couldn't even spell "No", so we got a taxi and, like a gentleman, I took her home.

Then, as we arrived, she grabbed the notepad and scribbled a single word, flashing it with some urgency in my face.

Wahey! My luck was in after all.

"Yeah, alright then," I said smugly, expecting an evening of solos on the pink oboe.

Then, I realised that she had actually, in her haste, merely spelled it wrong, as she sucked rich brown vomit all over the cab interior. And me, mostly.

And like a gent, I paid the hairy-arsed and extremely angry taxi driver thirty quid to clean up his car. I thought it nice and rather trusting that he actually took a cheque.

In retrospect, it was probably a good thing that we didn't get to do the dirty after all.

Manky I may be, but somehow, I just don't think I could ever bring myself to write "Tits or Mouth?" as I came to the vinegar strokes, and then waiting for her to put on her glasses, grab the pen and write down a reply. I don't know about you, but that would have killed any passion stone dead.