The Best Funeral Album in the World...EVER!

The Best Funeral Album in the World...EVER! 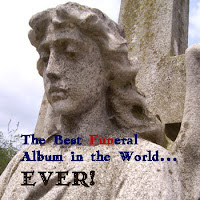 Bowing to the demands of my blog readers, today we are putting the "FUN" back into "funeral" and "heaving naked bosoms" back into "small crowd of tearful mourners" as we compile The Best Funeral Album in the World...EVER!

A recent trip to a funeral at Bracknell Crematorium - neighbouring, as it does, an army firing range - is perhaps the most depressing place on the planet. Already in the business of death, it is all you can do to stop suicidal mourners from throwing themselves in front of gun-wielding squaddies.

These people need cheering up fast, not getting themselves in a position where they are creating a load of unnecessary paperwork for blameless trained killers.

I have let it become known, on more than one occasion, that I would like to depart from this mortal coil with "Going Underground" by The Jam blaring from the chapel speakers, and, if there's still any doubt as to the mentally of the person they are committing to the cleansing flames of the Weymouth Municipal Crematorium, "The Birdie Song".

That'll sort the mentallists from the boys.

So far we've had the following suggestions:

Come on then - life's too short. Suggest me up!
Posted by Alistair Coleman at Monday, August 06, 2007

Email ThisBlogThis!Share to TwitterShare to FacebookShare to Pinterest
Labels: The Best Funeral Album in the World... Ever