On inserting foot into mouth

On inserting foot into mouth 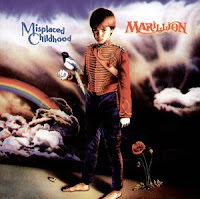 I'll be the first to admit that my listening tastes are, frankly, crap. I had - and still have - a liking for the late 70s/early 80s New Romantic movement, and the sounds that went with it. Sounds such as the phrase "Can I borrow some of your eye-liner?"

This culminated in my paying genuine cash money for the entire Ultravox back-catalogue and the unfortunate playing to death of "Einstein-a-go-go" as if it were the greatest song ever written.

Fortunately, I had friends. Friends who were into real music. Friends who didn't get The Muppet Show album for their 13th birthday from their parents. Friends who owned - and could play - a double-neck electric guitar with optional mandolin attachment.

They took me, one incredibly hot summer's day, to Milton Keynes, and sat me in front of a stage where Jethro Tull, Gary Moore and Marillion took turns at singing songs.

Marillion - the headline act touring their huge Misplaced Childhood album - came up, and did their two massive hits Kayleigh and Lavender as the second and third songs of their set.

"What a load of crap," I said loudly. "They've blown it. What kind of band plays their best songs at the beginning? Completely blown it."

Everyone laughed at me. It was a large festival crowd in a very large field, and the band reaching a particularly quiet passage, my foghorn voice carried for miles.

Everyone laughed at me. And by everyone, I mean everyone.

Misplaced Childhood, you see, is one of those concept pieces that the band only ever played complete, beginning to end. Kayleigh and Lavender are tracks two and three, part of the curtain-raiser for the rest of what is a remarkable album. I did not know this.

Of course, I know that now as it is one of my favourite albums.

Because I cannot be arsed to run a vote-o this week, confess your best foot-in-mouth moments.
Posted by Alistair Coleman at Thursday, August 30, 2007