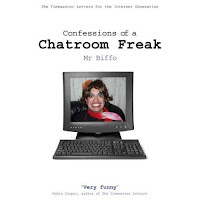 TV's Mr Biffo - the evil genius behind Channel 4's Digitiser magazine, and the man who got the c-word into an EastEnders script has a book out. It's a rather good book, and I should know because I got to read it before it was published. For free. FREE!

Confessions of a Chatroom Freak confirms the awful realisation that the internet exists for one thing only - to get desperate men laid. Men, who will battle against the fact that the "lady" they are chatting to is both completely bonkers and looks like a bloke in a bad wig because there's still a chance of seeing her naked before the evening's out. That lady is loopylisa21f, and the resulting book is very, very funny.

Rather than go on an actual book tour to promote it, he is doing the rounds of the blogs giving his tome the good, hard pimping it deserves. So, here he is, and he's not even bothered to dress up as a lady:

So, after everything you told me in that chatroom, it turns out you're really a bloke. Live and learn. Is there something deeply Freudian about the development of LoopyLisa, or am I just asking this question to make myself sound intellectual?

I’m sure there’s something profoundly Freudian about the entire nonsense, and I’m certain that the book is a by-product of some dark and fractured part of my psyche. That said, on the surface anyway, it is just a stupid humour book, but it would still be nice if people took some sort of message away from it. It’s juvenile toilet humour with a point. Of sorts.

The point being that, contrary to the perceived wisdom that folk can pretend to be anyone they want online, its in our everyday, real-world lives where we’re wearing the mask, and the Internet just exposes us for who we truly are. Just browse any Internet forum for a few hours if you want to experience the true ugliness of humanity.

God on a bum biscuit… I’ve actually just bored myself with that answer. Just like you, Scary-D, I’ve tried to make myself sound intellectual, when in reality the book is filled with references to poo poo and blow-offs. Come and get it, kids!

I remember the minor production crisis when you decided to pull a couple of chats with the most unbelievable racist out of the book. Were there any other chats excised on grounds of taste and decency? It's pretty clear that some of the blokes at the other end are typing with one hand...

Well… I wouldn’t call it a crisis, minor or otherwise. It was simply part of the editing process. Apart from the racist chats – which were exorcised more on the grounds that they weren’t funny, than anything else (and that’s my fault, because I think I was too shocked to type in the funnies) – I don’t think anything was left out on taste grounds.

There were plenty that didn’t make it for a variety of reasons, mainly because they didn’t go anywhere, or were just a bit rubbish.

The most shocking ones – though I have to say that thus far it’s only been my poor mother who has admitted to being appalled by the book – are all in there. If I do a sequel, and I’m already thinking about doing one, providing someone wants to publish it, I’m possibly going to try and tackle various types of bigotry head-on. Except that this time I’ll be slightly more prepared for it.

Having done the sexxus I want to dig away at some other parts of the psyche, in a way that only online chats can do. While still making references to smelly bum-mess. Obviously.

In the name of research, I've actually put up adverts on web personals sites as women of varying age, number of limbs and degree of desperation. Each and every one of them has garnered at least one reply featuring a photo of a man's cock. Does/did Lisa have the same problem? (Obviously, it's not a problem if you actually like men's cocks. I'm quite attached to mine, but that's as far as the fascination goes.)

Research? Oh, Scaryduck… At least I had the excuse of writing a book! *cough*

But anyhow… yeah. I think I got sent a couple of cock-shots, but I’m not sure those chats made it into the book. Actually, I say that, but I think one of them did, and I edited out the section where he sent me his winky. It’s sort of difficult to do that unless you can show the image – and we’ve had enough trouble getting publicity for the book as it is, what with its risqué nature, without including photos of male members.

When I first started I did do a few chats with a friend, where we let the guy chat to us on webcam. There was one where he started out by insisting he was single, but when I saw the pile of toys behind him it was fairly apparent that he was married with kids. I found that quite depressing.

I actually knew one of the people who replied to one of my sex-o-matic small ads (I worked in the same civil service office as him a few years ago, and he was a complete sex case then). Did you ever have one of these near death experiences while Loopylisa-ing? God help anyone if you actually arranged a meet-up.

No no no. Thank god. Though – as you may be aware – the first LoopyLisa chat was an act of revenge upon someone who I was once very good friends with. I’m not terribly proud of doing that, but in my defence I was in my very early 20s, probably. What’s more, he was nowhere near as disgusting as most of the men I chatted to in the course of writing the book, and with hindsight was almost a gentleman. Although I did learn how often he masturbated, which is a piece of information I’d rather have avoided.

And I can't believe that no-one else has asked this yet: What's Mrs Biffo's take on all this? Is "I'm researching a book" really a valid excuse? Didn't work for Pete Townshend, did it?

Well, arguably it did work for Pete Townshend, because he’s still at large, and playing Glastonbury.

But anyway, Mrs Biffo – whoever the hell she may be – is quite used to me dressing up in stupid outfits. That said, it’s rare that I dress as a woman at home (though if you look at the photos of LoopyLisa I’m hardly dressed as a woman – I’m wearing a sort of wetsuit thing). Though I do own a Wolverine from the X-Men costume. And a gorilla suit. And a set of Star Wars stormtrooper armour. The best costume I ever owned was this sort of inflatable pumpkin outfit. I’d puff it up, and it used to make my dog go mental. Which really was a treat to see.

My eldest daughter did walk in when I was having the photos taken, and walked straight back out again after muttering “Other dads don’t do this – why do you have to?”. But my wife? No. I don’t think she’s even read the entire book. Perhaps she’s in denial.

Now that yourself and Hairs - the entire Digitiser massive - are published authors, are there any more books in the pipeline? Would Lisa and her bonkers backstory stand on her own as a character in fiction?

Well, Hairs has a new book out later this year. And this time I didn’t even give him the idea for it.

Interestingly, we were talking last week about doing Biffovision as a book, now that BBC3 has officially, and somewhat inevitably, passed on the series. We thought it’d work as a sort of spoof 1980s TV series tie-in annual. And we probably will give it a go if we can find a publisher, but it’s looking more likely that we’ll take what we learned from Biffovision – basically, that there’s a limit to how experimental and surreal stuff you can get past commissioners these days – and try and do something else for telly. Maybe something animated. There is a school of thinking that the Digi-esque stuff we do together works best when it’s either written down, or being performed by animated characters.

Aside from that I’d like to do a sequel to Confessions, providing this one sells well enough to justify it. I would love – absolutely LOVE – to write an entire book based upon Lisa’s blogs, because it’s such a liberating, ludicrous, stream-of-consciousness. However, I’m not sure there’s a big enough audience out there to justify it – I doubt the character works when she isn’t interacting with real people. I’d love to prove myself wrong, mind, but I think the character works best when she has a real person to bounce off. So to speak. I mean, that’s the format, really. Look what happened to Dom Joly when he stopped doing Trigger Happy, and tried to turn himself into the host of a spoof chatshow. Ghastly.

I’ve a couple of ideas for books that I’d like to do under my real name – which is my main reason for releasing Confessions of a Chatroom Freak as Mr Biffo – but one of them is currently in development as a show at the BBC, so I’ll have to wait for that to get turned down first. Overall I am pretty busy with the day job, writing scripts and gags for telly, and it doesn’t leave loads of time for a novel or a travel book, however much I may want to do one.

And as for the Digitiser massive all being published authors, I can reveal that Digitiser’s Mr Cheese – who was, for a time, our ‘fifth Beatle’ – has also signed a publishing deal with Friday Books. Get us!

Is any of this remotely interesting to your readers? I suspect not.

Better still, as you’ve both made the move into television comedy, what about a sitcom about two games journalists fighting against their evil management?

I suspect the chances of that getting commissioned are less than slim. Anyway, from your one-line pitch, the commissioner in me would say “It sounds too much like The IT Crowd”.

Besides, I think I’ve exorcised all my demons where Teletext is concerned. I think I’d struggle to work up a big enough lather to squeeze comedy out of the situation. There’s only one person from Teletext to whom I bear a lingering grudge. Indeed, I shall take to my grave the urge to punch him hard in the thorax.

Having read your book and a couple from Mr Hairs, it is clear he is the one obsessed with buttocks. Are you the bosoms man, then?

Mr Biffo, thank you very much. Now clear off before I release the hounds

Confessions of a Chatroom Freak is available in all good book shops, quite a few of the crappy ones, and on Amazon.
Posted by Alistair Coleman at Wednesday, August 08, 2007