Excuse: I was a kid.

Actually, I was fifteen and ought to have known better.

Good God, I was fifteen, studying like a girlie swot towards my O-Levels, and I had the hots for a children's TV character.

While my contemporaries were pulling themselves blind over pages 210-240 of the Grattan catalogue, before graduating to page three of the Sun and the fold-out delights of Escort magazine, I was going all doe-eyed and inexplicably filthy over a dead Russian. 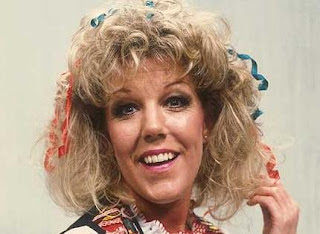 I like to look back on this sorry period as a transition in my life. A transition from fancying dead Russians, to having the hots for the none-more-alive Janet Ellis on Blue Peter.

Luckily, now that her lustful advances have seen off Fred Elliott, she will be mine, all mine!

I mean: tell me about your inappropriate crushes. I promise not to collate them into some form of hastily cobbled together dossier for blackmailing purposes. Honest.
Posted by Alistair Coleman at Wednesday, August 22, 2007