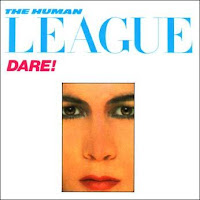 Dare: Not just a classic album by the Human League, but a game everyone can play!

This is a tale that can only have one ending: woe.

"I dare you," said Ernie to his quarter-witted side-kick and schoolmate Ju-Vid in a particularly dull maths class, "I dare you to say 'Fuck' to Mrs Smith."

It was to be a game of swearing in plain sight, then. Swearing so brazen that you either get clean away with it, or get detention for a month.

Either way, there's top playground kudos for even attempting it.

So: "Who can tell me the formula for solving quadratic equations?" she asked, the sunlight flowing through her floaty diaphonous dress, to the rapt attention of at least fifty per cent of the class.

One hand, straight in the air. Somewhat surprisingly, as it is the one hand that has never gone up in the entire school year.

"In your own time, Julian."

"Got it. X equals minus B plus or minus the square root of B-squared minus 4AC over 2 fucking B, miss."

"X equals minus B plus or minus the square root of B-squared minus 4AC over 2B, miss, what I said."

Buoyed by our crushing defeat of the powers-that-be, the dares just got worse.

Poor, poor Miss Orton and her comfortable shoes - we could play her like a piano, and any Home Economics lesson would become a teenage boy's dream - down and dirty descriptions of red hot lesbian sex, straight from the mouth of a practitioner of the Sapphic Arts.

But still, the game of Dare rumbled on.

"Been there, done that."

"OK - race you across the science block. You go over the top, I'll run round."

And Seany might have won, too, had he not put his foot through a skylight. Caught like a Treen in a disabled space cruiser, and sentenced to a month of cruel, unusual and ironic punishments.

Alas, we should have quit while we were still ahead. But no, we did not.

The bet was set at the nose-bleedingly high price of fifty new pence. We spat, shook and it was all official. There would be no backing out now.

Several of the round bluey-white cakes were procured from the cleaners.

Our school, keen to get the menial tasks done on the cheap, and with a ready pool of Eastern European migrants still two decades away, went for that other cheap market - sixth formers. Sixth formers who got at much as ten pounds per week, and were happy to take the cash and blow it all at the village bottle shop. For an insultingly low bribe, Ernie's brother came good with the gear, and we met up, next day, behind the Music Block.

One each, except for Manky Dave, who already had two of his own - fished, half dissolved out of the urinals by the language labs.

Immediately followed by: "Oh Jesus! This is foul!"

And: "YAAAAAAAAAAAAAAAARCH!", projectile style, all over the Music Block windows where a horrified Mrs Clarke had abandoned all attempts to conduct the Fourth Year Girls' Choir to take in the terrible vision unfolding outside.

Busted. Busted bad. But on the bright side, only one person needed stomach pumping.

The next day saw a special school assembly overseen by the vicar. His sermon: "The perils of drug-taking."

"Succumb not," the old duffer preached, all the time staring at our motley band of bog cube eaters, "Succumb not to the temptation of misguided friends! Only the fool experiments with forbidden substances! Kids - JUST SAY NO!"

Then he sat down to a barely audible yelp.

Twenty minutes earlier: "Hey, Ju-Vid. I dares ya… I dares ya to put this drawing pin on the vicar's chair."