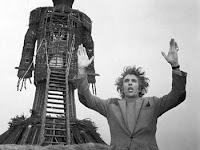 A recent trip to the rubbish tip on the Isle of Portland proved to be an offer too good to be true for my daughter Scaryduckling.

It is not every day, after all, that you get to dump your household detritus and a cunningly hidden bag of dog shite on the same lump of rock that harbours your good friend and ours, Useless Workshy Cunt of a Builder, over whom I am biding my time.

The rubbish duly dumped, we took the scenic route back, careful not to drive so slowly as to allow the mono-browed, shell-suited locals to have our hub-caps away, or to curse us with the evil eye.

The excitement of the trip getting to much for her, Scaryduckling wound down the car window as be approached a likely crowd of youngsters and prepared to let fly with a mouthful of Shakespearean invective.

Alas, the occasion of my daughter's first drive-by dissing of Portland Arts College didn't go entirely to plan, and her carefully rehearsed cry of "You window-licking, cousin-marrying numpties" came out thussly:

I nearly crashed my car with laughter, which would have undoubtedly seen the pair of us burned to death in his-n-hers Wicker Men, but I presently regained control sufficiently to drive to safety.

By the time we had managed to leave the island and return to the relative safety of the English mainland, the insult had been further refined to add further unspeakable habits of our neighbours of the Court Leet*.

We are dreadfully aware that this insult needs further work. Any suggestions?