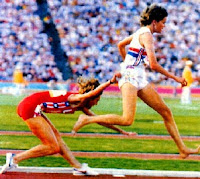 Once every summer, as a breeder, you are dragged by the scruff of your neck to the very gates of Hell. The School Sports Day. Woe, woe, and thrice woe.

Many, now, are the July afternoons I have sat in baking hot school fields watching other people's darlings running up and down with china eggs balanced on spoons, cheating horribly in the sack race, or simply getting confused by an over-elaborate obstacle course. I've seen it all.

I have - to my eternal shame - even gone "Aaaaah" at the poor little sweetums who got his shoe stuck under the obstacle race's crawl net and trailing in miles behind the rest of the class. This was seconds before realising that sweetums was the boy Scaryduck Junior, and giving him what for on account of the parental embarrassment.

I have even flouted the ban on parental cameras at these events. Not because I am some dreadful pervert, peddling my wares on the padeo version of Flickr (called - I am led to believe - GaryGlittr), but because I refuse to shell out two quid for an out-of-focus picture taken by the deputy head that features one of my offspring as a pin-prick in the background.

However, for some parents, watching is just not enough. There are still grown-ups who seem to have forgotten they left school a couple of decades ago, and line up for the Mums' Race.

The first thing you notice about the Mums' Race is the number of parents who are taking it all too seriously. Sure, there are a number of Yummy Mummies, but the lovely Mrs Duck is yummier that the lot of them, which makes me a happy, happy man. You spot, however, a number of these specimens sporting well-worn trainers, doing stretching exercises and jogging up and down to limber up.

All for a fifty yard dash down the field and a free 2p lolly.

The whistle blows, and in a high-pitched cacophony of encouraging shouts, the dozen-or-so mums bowl down the course in a frenzy of bouncing buzooms which, I swear, I was not videoing for future reference. I swear it just started filming by itself, but the result is now used in Dorset County Hospital as a means of raising the dead.

Alas, all is not well, as two of the more competitive runners come together ten yards from the finishing line, like Zola Budd and that American bird in the LA Olympics. Only with more buzooms and tattoos.

The result of this collision allowed the third place runner - a bleached, leggy specimen throwing caution to the wind by running in heels, who had previously given up hope of Mums' Race glory - to make a dive for the line and certain victory.

OK, less of a dive, and more of a plummet, to be honest.

She fell - to a mixture of horror and amusement from the gallery - off those heels, and landed face-first on the rock-hard school field in an explosion of blood and snot.

Meanwhile, Zola Budd and her arch-nemesis screamed and flailed at each other with claws out, while another less athletic type eventually sauntered over the finish line to claim victory, and promptly lit up a cigarette. A lesson to us all, I think.

They eventually scraped the poor, fallen woman* from the field, one tit hanging out and a face like Amy Winehouse as she bowked rich, brown vomit all over the St Johns Ambulance lady, and carted her off to hospital, never to be seen again.

This year, there was no Mums' Race. Can't think why not.

* Not fallen in that sense, but you can never tell in these days of a cash-rich service industry dominated society, can you?
Posted by Alistair Coleman at Friday, November 02, 2007