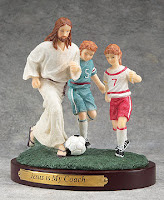 Last week's Baker and Kelly show faded in with some lounge lizard singing along to the Match of the Day theme. He is, you will be unsurpised to learn, not the first misguided fool to give this famous old piece of music some words, for we had an equally untalented vicar who got me on national television with his version of this most stirring of tunes.

My parents used to pack us all off to Sunday School for a good bit of churching up when we were kids. We were forced, at gunpoint, to a freezing cold hall where over-enthusiastic old ladies would attempt to halt my inevitable slide into Hell.

Toward the end of the day’s indoctrination, the local vicar would arrive, cheeks still bulging from communion wafers, and let us have both barrels of a kiddified version of the day’s sermon.

However, he didn’t just stop there. The good Reverend was a God-botherer of many talents. Taking his cue from the likes of Charles Wesley and John Newton, he wrote hymns. Wesley only managed such piffling works as “Hark the herald angels sing”, while Newton knocked out “Amazing Grace” on the back of an old envelope.

Reverend Fred, however, was influenced by Weird Al Yankovic and was under the impression that changing the words to established tunes was something “fun”. So, he took the theme tune to Match of the Day - surely the greatest piece of music ever written - and turned it holy. Spurred [geddit?] by this relative success, he added new words to a whole arsenal [eh? eh?] of football chants and made us, The Kids, sing them. Every bloody Sunday.

Rabid self-publicist that he was, he was granted a nutter-of-the-day spot on the BBC's Nationwide programme. Every edition of this programme seemed to have at least one mad old idiot and his useless talent (most famously the chap who claimed he could jump on eggs without breaking them), and now it was our turn.

Come Sunday morning, cameras turned up at the Church Hall and filmed us singing a badly rehearsed version of Match of the Day, trying to remember the words whilst waving football scarves over our heads in a manner that only exists in the minds of TV producers who have never been to a football match in their lives.

As one of the mad old bats hammered away on the piano, we sung from our hastily-prepared song-sheets while the vicar stood at the front looking smug:

And several verses that I can, thankfully, no longer remember. However, the implication of rhyming "God" with "His loving rod" was entirely lost on the vicar, but not on the young teens in the choir, who sung it with gusto.

I felt a certain amount of celebrity over the whole getting-on-national-television business, and hoped to be feted like some sort of cherubic superstar once our moment of glory finally hit the small screen. And so it came to pass: my fellow Sunday School victims and I arrived at school the following morning fully expecting a hero’s welcome. Fat chance.

Proof indeed that the Devil has all the best tunes.
Posted by Alistair Coleman at Tuesday, November 13, 2007

Email ThisBlogThis!Share to TwitterShare to FacebookShare to Pinterest
Labels: danny baker, Football, match of the day