Mirth and Woe: Up the Arse

Mirth and Woe: Up the Arse 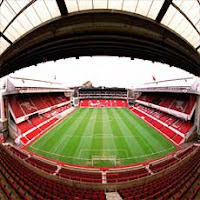 I mean, would you leave a theatre early, having spent the best part of fifty quid on a ticket?

No. You would not.

"Come on son - tube to catch - beat the queues - we know how it ends anyway."

So, why leave a football match early? It's not as if you've bought an eighty minute ticket, or something.

If you leave early, you've got to have a spunker of an excuse. A proper one. You've got to be dying at the very least, and dragged out on a stretcher.

I left a match early. A match for which I had paid genuine cash money for a hundred per cent valid ninety-minute ticket.

I had a brilliant excuse: I needed to be sick inna hedge. Watching the Arsenal. A kick in the fork for the first person to say "totally understandable".

So, off I went to an Arsenal home game against the might of Oxford United (a team so bad they fell off the pools coupon), suffering from a dreadful bout of the flu. Not feeling well enough to stand on the North Bank for a couple of hours, I excused myself from my mates, and bought a ticket in the East Upper stand to watch the match from the luxury of the seats.

In the terraces I might have been warmed by the press of human bodies, but up in the top tier amongst the stiffs, all I got was a cold, cold wind right up the swonnicles, as an unimaginative Arsenal team played out a dull 0-0 draw against equally uninspired opposition.

Most of the second half are a complete blank to me, and I was nudged awake by the old chap in the seat next to me, who informed me - to much mirth - that the match was so dull I had actually spent the last thirty minutes snoring loudly.

At 85 minutes, shivering and feeling not long for this Earth, I staggered from my seat and began the descent down to street level and the furnace-like heat of my Austin Allegro's air conditioning.

I made it down to Highbury Hill, and not a moment too soon. The shivering got worse, and barely conscious, I puked rich, brown vomit into a hedge, the gutter and one or two other early leavers.

And just as I thought it was over, I puked even more.

The Plod, thinking I was a drunk getting his just desserts, came over to make his easiest nick of the day, only to stop in his tracks when he saw my shivering, pallid visage.

"Flu", I whispered before double over again for another bout of nuclear-powered chunder.

Then there was a roar.

The roar of a crowd who had just witnessed an 89th minute winning goal, flying into the onion bag from about thirty yards out.

"That'll teach ya" said the copper, with some satisfaction, as I dry-heaved some more.

I never saw that goal. Too ill to watch it on TV that night, and before the age of the internet, it was lost forever. All I had was the awed description from mates and a less-than-informative review in the Sunday papers.

That'll teach me.
Posted by Alistair Coleman at Friday, November 23, 2007