On sorting out the Royal Mail

On sorting out the Royal Mail 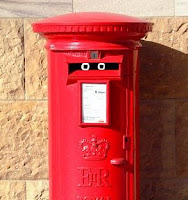 I see the Royal Mail has got a new corporate slogan: "Delivering value"

What – and I believe I speak for a great much of the Daily Mail reading public - a load of old bollocks.

"Delivering some of your letters, if we can be arsed", more like.

"Delivering some of your letters, if we can be arsed, all with a suspicious-looking rip in the corner where some thieving scrote in the sorting office has had a sneaky peak to see if there's anything worth lifting."

Sadly, that doesn't fit on the back of a van, so "Delivering value" it is, being only slightly better than "Royal Mail: Shite"

The rot set in when they stopped executing postmen who stole from Her Majesty's Postal Service. Who can forget those rose-tinted days where the bodies of transgressors were hung outside your local sub-post office, eyes pecked out by crows, a sign hanging round their neck saying "I stole Little Sophie's birthday money" as an example to others? Golden days, indeed.

Of course, the whole employing the criminal classes thing isn't good for the image of the Mail as a business, and tars the many honest, hard-working, never-stole-a-pair-of-panties-from-a-Figleaves-parcel postman with the same brush. My excellent postman, for example, is as honest as the day is long, despite being the living spit of Josef Stalin, right down to the KGB-issue suspenders.

But it's a problem they can confront head-on, improving the Royal Mail's image AND profitability into the bargain. So, if they are going to employ crooks, thieves and swindlers, they might as well try out my natty little business plan I've got lined up for them.

It's come to my attention that just about every large town in the country has a Sorting Office AND a Prison. At some stage or other, most of their workforce will find themselves in either of these two establishments, so why not just merge the two?

After all, the PO and Her Majesty's Nicks have a long tradition of cooperation, viz: sewing mailbags, so why not just move in the rest of the operation?

There's a large, captive workforce, employed at somewhat less than the minimum wage who'd carry out the same sorting functions as the many, now unemployed posties. Mail can be moved around the country in the same vans they use for prisoner transfers, and frankly, the security's tip-top.

Lags on day release can do the rounds, giving them plenty of opportunity to indulge in a bit of housebreaking that will only increase their prison terms and increase the Post Office workforce.

It's not as if it's anything new. The inmates of all of Her Majesty's Prisons manually route through every call and text message to all of the major mobile phone networks. Hence the name 'Cell Phones'.

And I know what you're thinking: We won't let the paedos near the birthday cards, infecting your sweet, innocent kiddiewinks with their nonce germs. They'll be put in charge of the new Send Your Starving, Rabid Leopard By Post service.

It's a win-win. Unless, of course, you're sending large quantities of diamonds through the post, then I suggest you employ Fat Luigi's Sicilian Courier Service and Legs Broken.

(Note to large numbers of visiting posties: This is a humour blog, written entirely for shits and giggles. I'm not really ripping the piss out of you. I love you all. Honest).
Posted by Alistair Coleman at Thursday, October 23, 2008

Email ThisBlogThis!Share to TwitterShare to FacebookShare to Pinterest
Labels: I am not mad, lingerie, royal mail