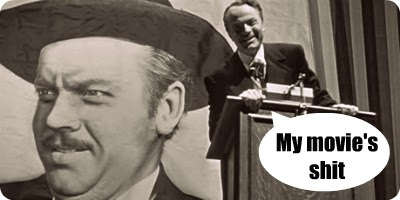 According to the TV adverts, Spy Kids 4D is "the greatest movie ever", and because this claim has been made on national TV, that makes it 100 per cent official.

Sorry, Citizen Kane, but you can't argue with the idiot box. It's Spy Kids 4D now, and when they make 5D with extra made-up dimensions, the rest of the film industry might as well jack it in.

Did Citizen Kane come with a scratch and sniff card?

The answer to these - and several other completely pointless questions - is, of course, "no". Hell's teeth, Citizen Kane isn't even in colour.

Give it up, Orson Welles, you're shite.
Posted by Alistair Coleman at Wednesday, August 17, 2011