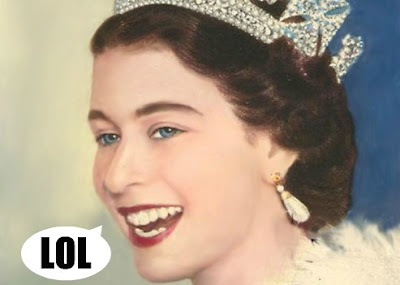 The Queen - a betting woman herself - has thumbed her nose at the bookies and named rank outsiders Chelmsford, Perth and a small, roped-off area in Wales called St Asaph as new cities as part of her Diamond Jubilee celebrations. In our humble opinion anybody who might have had a punt on these three romping home would have made a pretty penny and no mistake. In fact the odds on all three were son long that Paddy Power hadn't even bothered listing them. Not that we're suggesting anything. At all.

Anyway, rooting through the bins behind the offices of Deputy Prime Minister Nick Clegg, we found among the Tesco Meal Deal wrappers the official briefing paper on the winners and losers, which we summarise below. Damning reading for Reading, we think you'll find...

The winners
Congratulations to Chelmsford, Perth and St Asaph on your city status. Government officials will arrive today to discuss ghetto construction

Southend
Hardly a surprise. Her Majesty's had it in for Southend ever since she threw up on the Kursaal Flyer back in the seventies after a dodgy hot dog. And nobody told her that "a quick walk down the pier and back" on a Saturday afternoon would take three hours and cause her to miss four of the ITV Seven.

Reading
I don't blame Her Majesty for her decision. She's had a downer on Reading ever since Prince Philip had a dodgy kebab down the Oxford Road in the seventies. Then there was the much-vaunted visit to the futuristic Metal Box building around the same time. Due to a misunderstanding, she was locked in an actual metal box for three hours. Never forgave the place after that. Also, she thinks Ricky Gervais is a twat.

Bournemouth
Her Majesty has always had a downer on Bournemouth, ever since she was served a poor breakfast during a B&B stay during the 60s. She now spends her spare time writing middling-to-bad reviews for local hotels on TripAdvisor.

Goole
Her Majesty took one look at your application and said "I say, aren't people from Goole called Goolies?". Nick Clegg agreed, and that was that.

Milton Keynes
You'll ALWAYS be a city (to any producer of a TV series that needs somewhere that looks like America, but isn't America)

Tower Hamlets
Nice try, but the clue's in the name, isn't it? City of Tower Hamlets just sounds stupid and would just confuse foreign tourists looking for somewhere quaint on their London holiday experience. Why not just hold a council vote and change to MEGA CITY ONE? I'd pay good money to visit anywhere called Mega City One.

Bolton
Hardly surprising, but never in the race after "Big Sam" accidentally nutted Her Majesty in the face outside Wetherspoons.

Dudley
In retrospect, the town motto of "You will never find a more wretched hive of scum and villainy" didn't help matters much

Congratulations to the winners! Stick around for Her Majesty's next announcement on which of her children she likes the best. Prince Edward being a 5,000-1 outsider with the bookies.
Posted by Alistair Coleman at Thursday, March 15, 2012

Email ThisBlogThis!Share to TwitterShare to FacebookShare to Pinterest
Labels: Her Majesty the Queen, Reading