Politicians launch a holy war on science, ends pretty much as you'd expect 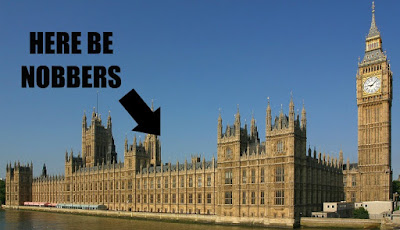 There are times when you realise that political allegiance is no bar to stupidity; and that stupidity is no bar to holding office. I don't usually post on politics these days, but this is cross-party idiocy, so I'm pretty much in the clear.

Take this veritable tale of woe, in which three MPs from each of the main parties, going under the name Christians in Parliament, have written to the Advertising Standards Authority in a bid to overturn a recent ruling in which a group of god-botherers were banned from handing out leaflets which claimed the power of prayer can heal.

"NEED HEALING? GOD CAN HEAL TODAY!... We believe that God loves you and can heal you from any sickness."

These MPs are genuine people, who have been to school and everything, and have stood in actual elections and enough people have voted for them to allow them to make (cough) educated decisions about the future of the National Health Service and how our children are school. Yet, here they are writing to the advertising watchdog demanding that the ASA provides scientific proof that God CANNOT heal the sick in the middle of a shopping street in Bath.

News for you chaps: Science doesn't work that way. What you three need to provide is actual proof that your deity can heal "any sickness" through the power of prayer, have it peer-reviewed by other scientists, then book the first flight to Stockholm to pick up your Nobel Prize. The fact that nobody has actually managed this feat may tell you something.

And no, the Member for South West Devon, telling the ASA that you once had a sore hand, prayed over it, and it got better is known in science as "anecdotal evidence" and it doesn't count. "What does the ASA say about that?" you ask. I imagine the answer is "Ha ha ha ha haaaaaaaaargh, you nobber."

Furthermore, I'm pretty sure that even footballer Fabrice Muamba, who you claim has made a miraculous recovery because sufficient people thought nice thoughts for him (although the Pray 4 Muamba business was good is a bringing-people-together sort of way), would actually credit the NHS doctors, nurses and ambulance crews for his survival. I think you'll find the "think nice thoughts and the bad thing will go away" device actually comes from a recent Doctor Who episode called "Last of the Time Lords". If there's anybody to thank, it's David Tennant.

I say this because this coming week I shall be having a metric fuckton of root canal work performed, and I'm not looking forward to it. However, I am reassured by the fact that the work is to be undertaken by a nice dentist called Jose with a plentiful supply of painkilling drugs; rather than a vicar and a couple of nuns praying over me while I scream blue murder.

However, if any passing Members of Parliament would care to undergo root canal treatment whilst a vicar and a couple of nuns do the old laying on of hands, I will be the first in line for tickets.

It is at times like this that we remember the one and only commandment of Holy Church of Don't Be a Dick, the religion that doesn't believe in religion: "Don't be a dick".

Enough of this pointless asshattery, you clowns. You've got a country to run.
Posted by Alistair Coleman at Tuesday, March 27, 2012

Email ThisBlogThis!Share to TwitterShare to FacebookShare to Pinterest
Labels: a little bit of politics, nobbers, Science, The Holy Church of Don't Be a Dick