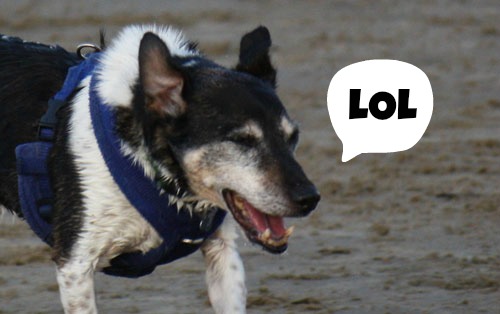 "Hello, Stumpy, how are you?" said the middle-aged woman as she made a fuss of The New Dog Wilson Blue Rabbit, "Have you been a good boy since I last saw you, Stumpy?"

She looked me in the eye: "He IS called Stumpy, isn't he?"

Poor The New Dog That Was Formerly Called Wilson Blue Rabbit But Is Now Stumpy, for his name is now Stumpy.

But the upshot of this is the fact that somewhere out there in Fleet is a Jack Russell Terrier called Stumpy.

UPDATE: I have now seen the real dog called Stumpy. And he is - indeed - a very stumpy dog.
Posted by Alistair Coleman at Tuesday, August 27, 2013

I have to direct you to the legend that was Stumpy. This thread has since been turned into a book. It's a very funny read :-)
http://www.arrse.co.uk/now-thats-what-i-call-arrse-1/6271-kin-ell-been-heavy-here-today-so.html

Ummmm... who renamed the dog?
You? The better 1/2? Some stranger with a stumpy fixation?