At the World's End

At the World's End 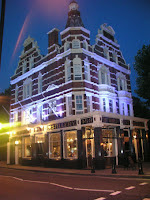 As a small boy, and latterly as a fully-grown man, I spent far too many years terrified out of my wits. Any number of things scared me shitty - Big Ben in London actually made me poo my pants as a kid, and I went through a Damian-esque fear of churches at one stage. However, for complete and utter youthful screaming terror, it was a public house in Chelsea called the World's End.

Yes. Yes, I know. It's only a pub. A rather poncy gastro-pub establishment these days, full of poncy Chelsea types who like that kind of thing. But back then, what was clear to me - and a fact that the rest of the population were completely unaware - was that some daft sod had gone and stuck the End of the World in a pub in Chelsea. Living in Hammersmith, having Armageddon just down the road was a little bit too close for comfort.

On thinking about the whole End-of-the-World-inna-Pub concept, it was clear to me that they had put it in the cellar, next to all the empty bottles which they should really be taking back to the shop for a 5p refundThe End of the World was a large bottomless pit, full of terrifying, unnamed creatures; which would emerge, when the time was right, to roam the streets as the planet ripped itself asunder, feeding on the souls of those too slow to get away. Just like an episode of Last of the Summer Wine.

It being Chelsea, I doubt if anyone would have noticed The Old Dark Ones stalking about. Especially if Fulham were playing at home.

In normal circumstances, I would be brave enough to face down my fear by paying a visit to the World's End to prove to myself for once and for all that it's not so bad. I might even get a decent pint into the bargain. But then, I might be wrong. I might fall in.


The End of the World, and a Thursday vote-o

A vote-o! With Armageddon just around the corner, it hardly seems worth the bother. But here you go, five of me finest Mirth and Woe for you to choose from for tomorrow's story.

Hole in the Ground: "And that's the problem with the French," he grunted from the next cubicle down, "France will never produce a world-class darts player until they sort out their plumbing"

Bin: It was only then that I realised that coach parties had been arranged in my absence with the sole purpose of seeing me flailing around like an inverted spacker

Science Lab - The Trial of Blood: We wanted fresh human blood for this experiment. From virgins. If only we could find one.

Rubbery: If he didn't already lack two in the bollock department, I might have removed them myself with a blunt modelling knife.

Go on then, vote, vote, vote me up. Random spot prize for the bestest, sssssexiest vote.
Posted by Alistair Coleman at Thursday, January 25, 2007

Email ThisBlogThis!Share to TwitterShare to FacebookShare to Pinterest
Labels: The End of the World, The Old Dark Ones