Oh Lordy! It's the return of the Horror-Scopes!

Oh Lordy! It's the return of the Horror-Scopes! 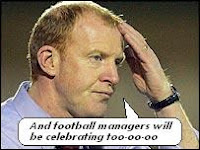 As the old year is clocked over the head like an unwanted grandparent, and left in the gutter of history for carrion, it is time to look ahead to 2007 to see what the year has in store for we all-too-mortal humans. Woe, on the whole, it turns out.

And who better to see the future than former West Brom manager and Sheffield Wednesday legend Gary "Mystic" Megson, looking into his crystal football? On me 'ead, son!

Aries: The failure to employ an adequate offside trap in away fixtures means that you, dear Aries, will be struggling for a play-off place come the end of the season. That will, however, be the least of your worries as summer brings an army of Jocky Wilson clones taking turns to sit on your face. Lucky colour: puce

Gemini: For the first time in your life, you will no longer have to face the taunts of your family over your choice of hair style. A nuclear winter tends to change people's world view like that, don't you think? Lucky ice cream: Cornetto

Cancer: Angels on gilded wings look down on your sainted, successful life of love, charity and happiness. Only joshing. It's Ebola again. Bet on second favourites in National Hunt races. You'll lose, but that's the kind of guff that keeps gullible people like you happy, it turns out.

Leo: Restless Leo - 2007 sees you fulfil your dream of seeing the world and meeting new people. Slavery's not so bad once you get used to it, and neither is having needlessly painful plastic surgery so you look like Anthony Worall Thomspon. Lucky author: Jeffrey Archer

Virgo: At last you achieve the lasting fame and recognition you have been seeking your whole life, dear Virgo. Oh, how the whole world will remember you name, as 'The man who was bummed to death by a Tiger during the Superbowl half-time show' is a bit of a mouthful. Especially as your mouth was full. With Michael Jackson. Lucky singer: Michael Jackson

Libra: Oh. The St Winifrid's School Choir. What a way to go. Lucky elderly relative who there is no-one quite like: Grandma

Scorpio: Your unselfish sacrifice will not go unnoticed by the British people, and the posthumous George Cross is the very least you deserve, dear Scorpio. Still, if a suicide bomb's the only way to deprive the gene pool of further Jade Goody offspring, then so be it. Even if you had to climb inside. It would have been a VC if you'd have got Chantelle, but c'est la vie. Lucky Fools and Horses character: "Dave"

Sagittarius: And they said a manned mission to Mars would be impossible, what with the great distances, the dead cold of space, deadly radiation, the enormous quantities of supplies required, and the need to endlessly recycle the air that you - the chosen one - would have to breathe. And they'd be right. The world looks forward to the free firework display of your firey re-entry in 2012. Toodle-pip. Lucky 80s pop video: "Hello" by Lionel Ritchie

Capricorn: Be careful what you wish for. No man has ever seen Bonnie Langford in the nip and lived to tell the tale. Lucky lucky lucky: Kylie Minogue

Aquarius: Did not Our Lord Jesus say 'Blessed are the meek, for they shall inherit the Earth'? Your little encounter with the Russian 10th Guards Tank Division must have slipped His mind when He said it. Look on the bright side, they'll be able to post you home without the need for a 'large letter' stamp. Lucky former UN Secretary General: Boutros Boutros Ghali

Pisces: You know that famous rugby song that finishes 'And she was split from arse to tit / And the whole bloody issue was covered in shit'? My advice to you, dear Pisces, is to steer well clear of blacksmiths this year. Back a team from either the northern or southern hemisphere in this year's Rugby World Cup. Lucky Astrologer: Mystic Megson

If it's your birthday: You won't be needing your presents, not where you're going. Can I have them?

Another sparkling year ahead, then pop-pickers, in which I see nothing but shedloads of money for myself, and painful death for you. For a more detailed Astro-Tarot-Feng Shui-Haiku-Coprophile reading of your stars, why not ring my premium line phone service? Only five quid a minute, and worth every penny. Pip pip!


Also: If you think you're due a bad year, TV's Mark Freeland knows of somebody who has had far, far worse. In rhyming couplets.
Posted by Alistair Coleman at Wednesday, January 03, 2007