On being a heartless bastard

On being a heartless bastard 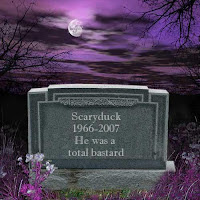 Blogging legend Terry Ravenscroft wrote recently on how dead people tend to be eulogised to the skies these days, rather than being condemned as the shithouses they were when they were alive.

For example: You notice that when people leave bouquets of flowers at the scene of a tragedy they always come with a heartfelt "WHY?!" or "Now at peace" on the card. That's the kind of sentimental gushing towards complete strangers they're good at in Liverpool that got Boris Johnson into so much trouble. It comes to something that people were even saying nice things about General Pinochet last year, even when it was abundantly clear that he was, in life, the shithouse's shithouse.

The murders of the five prostitutes in Ipswich last December being a damn good case in point. Nobody gave two shits about their welfare when they were living, breathing individuals,just as long as they gave a VAT receipt with their services. In death, however, they became The Slatterns of All Our Hearts, getting a minute's silence at Ipswich football ground, presided over by the local bishop, no less. Perhaps the first XI were regulars, I dunno. At least Norwich City have the exotic delights of Delia Smith to fall back on by way of a win bonus, so no wonder they're shit.

We'll mourn anything these days. No sporting event ever gets a chance to kick-off without a couple of minutes for the physio's cat that fell under the team bus. Millions who died in the war? Sod 'em - I bet Red Rum got a more respectful silence.

Enormously heartless that I am, I find this sort of collective hysteria hugely entertaining. I might probably have been lynched if I went out in public after Diana carked it, laughing cruelly at the fact that the Emperor was quite clearly in the buff.

It's time we were more honest about things. If we're going to start leaving flowers lying about for people, let's at least make sure we say what we really mean.

Nobody ever leaves "HA! That'll teach you for driving at 95mph in a built-up area, won't it?" or "You twat. I told you not to smoke in bed", or better still "See? I told you to go see a doctor about it."

* "Can I have your record collection?"

* "At peace, free of erectile dysfunction at last"

* "Thank God. I thought you would never go"

More truth in mourning. That's what we need.
Posted by Alistair Coleman at Tuesday, January 16, 2007