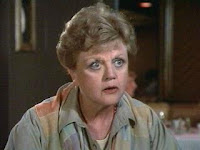 This year, the BBC went and dragged up two hours of horror from the depths of my childhood by screening the bloody awful Bedknobs and Broomsticks over Christmas.

It was, at the age of six, the first film I ever saw in a cinema. With little else to do with myself, I sat and watched it right through, and it was as boring now - and somewhat creepy - as it was then.

It also sparked a lifelong and entirely rational fear of inventor of the wanking machine Angela Lansbury, and leads directly onto the suspicion that she carried out each and every one of those gruesome killings in that well-known documentary series 'Murder, She Wrote'. 263 episodes, and they never caught her. Beat that, Harold Shipman.

I still remember my mother's comments as we blinked our way into the Vancouver sunlight that afternoon once our ordeal was over:

"I'm not taking you lot anywhere, ever again," a mantra that was to be repeated many times throughout my childhood.

Last night, and as some form of payback, Channel Four screened Life of Brian, my first ever "grown-up" trip to the cinema.

OK, so I had to turn up at the Odeon in Reading armed with my birth certificate to get in, and poor, poor Steve, whose birthday outing it was let slip it wasn't his fourteenth birthday until the next day, and was forced, by a grinning commissionaire, to wait outside. The rest of us, loyal friends that we were, had the time of our young lives, and it was worth it just to see a hairy minge ten feet high on the screen in front of us.

Ju-Vid hid in the toilets and watched the film three times in a row, just so he could see The Minge again, and not - and this accusation haunted him for the rest of his young life - so he could get another good look at Brian of Nazareth's nob.

What, then, was your first fellum?

That other award-winning blogger Zoe notes that the nominations are open for the 2007 Weblog Awards. Now, I'm not going to tell you who to vote for, but the usual free beer, money and sex offer still stands.

Get in there!
Posted by Alistair Coleman at Tuesday, January 02, 2007