Tea: Fuel of a nation

Tea: Fuel of a nation 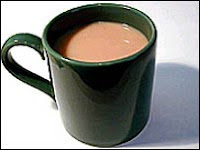 I have written on tea before, but, for once, I do not care. This is important, damn it.

Nothing beats a nice cup of tea and a sit down, and the perfectly executed cup is enough to revive even the hardest of days.

So why, then, does our work canteen contain endless box upon box of such crimes against the tea-maker's art as "Raspberry Refresher" and "Peppermint Ponce". This is not tea. It is evil. Even PG Tips is adequate compared to these. It is telling that these so-called "teas" are often purchased by women, highlighting, once more, of the necessity for men to take control of any tea procurement process.

The Campaign for Real Tea starts here. Tea should be stewed for at least half an hour before serving, preferably in a mug last washed up in 1973 with full-fat milk and six sugars. Tea which breaks several international conventions against chemical weapons but we do not care. Anything else is a betrayal of British values.

Furthermore, people who cut in at the front of the canteen tea queue saying "Can I have a slice of lemon?" should be dragged out and shot like the treacherous dogs that they are. If God meant us to take tea with lemon, then why did he give us cows? For milk and tea and tasty meat, that's what. He also gave us guns so we can kill these people to death. Top work, tea-quaffing bearded guy!

Cut an Englishman in half, and you will find tea flowing through his veins. Actually, you won't because he'd be dead. But he'd die drinking English tea, the cup still clenched him his still-warm hands, his entire will-and-testament given over to funding a war against coffee-producing nations. The French can take their EU-approved café-de-puss-puss and stick it where the sun doesn't shine, because tea TEA! is the best.

Email ThisBlogThis!Share to TwitterShare to FacebookShare to Pinterest
Labels: Tea