On trying to hate Big Brother

On trying to hate Big Brother 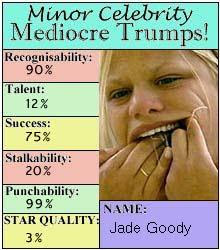 This was going to be the year, bored witless that I am, that I was going to give a shit about Celebrity Big Brother.

Then they moved Jade Goody and her awful, awful family into the house, and that was the end of it. They can all get to fuckery as far as I care, and that's the end of that.

Actually, no. I 'm of the opinion that they should follow the inevitable evolution for these programmes as theorised in Doctor Who last year: all reality TV contestants should be killed to death in an ironic manner as soon as they are eliminated from the game.

Finding yourself transported to a space-ship lurking at the edge of the Solar System where the victim is turned into a Dalek might be taking it a tad too far. I am, then, all for a fight to the death. Jade Goody vs Chantelle, with their weapon of choice, in a darkened cellar. That'll see how committed they are to getting themselves into the red tops.

Jade Goody, in the words of the great philosopher Homer (Simpson): "This woman is far richer and more successful than you'll ever be, so why bother?" I believe this sums up the entire futility of human existence, and we might as well just, collectively, end it all now.

You know, pay me enough money and I will be willing to believe that she is in fact Professor J Goody MSc, currently undertaking a long-term study into the behavioural characteristics and social interactions resulting from the concept of "celebrity" in British televisual culture in an enclosed environment.

It'll have to be quite a lot of money.

We are, I think, rather wasting our time here. It would be much easier, say, if we got the right sort of people into Big Brother in the first place. People you wouldn't mind watching as they beat each other to death with the severed left leg of Natasha Kaplinksy in a Celebrity Battle Royale to end them all.

* A peach that has been left to rot under the fresh fruit counter in Tesco, and then forced to take part in Mastermind, specialist subject 'Being a dim bint'.
Posted by Alistair Coleman at Monday, January 08, 2007