Mirth and Woe: Hole in the Ground

Mirth and Woe: Hole in the Ground 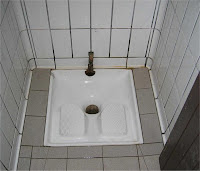 As a youth, I went on many, many school trips. In retrospect, most of these were utterly rubbish, organised-at-the-last-minute efforts which included sojourns outside the school gates standing by the side of the road, counting cars; and a canal trip where somebody had left a lock open overnight, all the water got out and we had to walk.

I also vaguely remember a day out at London Zoo, where several members of our party actually managed to slip away from the main group and spent the afternoon wondering the streets of London. That was second year infants. We were six at the time, and the panicked look on Mrs Burton's face was a joy to behold, and the guilty parties were withheld school milk privileges for the rest of the week.

It was when we were abroad that things really went wrong.

The fools let us loose in Paris, with the merest of adult supervision. With teachers supposedly in loco parentis, it was hardly surprising to learn that they spent their entire time trying to jump into each other's beds. Which was pretty bad for Jim and myself, sharing a room with Mr Douglas an' all that. Most of our evenings, then, as responsible fourteen-year-olds, were spent in the bar next door to the hotel, knocking back beers and trying (badly) to chat up the local hairy-armpitted talent. I was on the bounce-back from failing with Andy Kite's sister, and I admit I hit the bar pretty hard. It hurts even now. Not the rejection - the lump on the side of my head.

During the day, we were carted - with a large packed lunch provided by the kitchens of no less an establishment as the Moulin Rouge naked tart joint - to some Parisian landmark, as our adults sat around smoking.

Take the Thursday of our week in Paris, for example. We were, I am forced to admit, bang out of order. But, God, it was fun:

So, when you're 14 years old and halfway up the Eiffel Tower eating your packed lunch with twenty other teenage idiots, what do you do when you see a Hollywood film crew setting up in the plaza below?

Oranges, hard-boiled eggs, they got the lot.

My years spent at the fringes of the school cricket team throwing like a girl paid off instantly as I scored a direct hit with a pot of yoghurt on a rather flashy hang-glider that was to play a crucial part in the action, causing no end of abuse, and the transferral of blame onto another, entirely innocent party of schoolkids from Germany. Crew-members and cast fled for their trucks, as we fled for the exits.

We refuse to apologise. Condorman was shit.

This fiasco, though, paled into insignificance on our doomed French exchange.

On an exchange trip to France, we were taken to the local leather tannery, which stunk of shit and was littered with bits of dead cow. We were abandoned there for several hours, and I think we were expected to work, or something.

My abiding memory of that descent into hell was, on asking for the toilet, I was ushered to one of those hideous French holes-in-the-ground, where the previous occupant had missed by some considerable distance. The manky fuckers.

The next day, the miserable French girl with whom I was billetted had her old man take me to his place of work. He operated the local sewage works.

There, too, was a hole-in-the-ground toilet, where there lay a huge, reeking French turd, which had presumably been laid the night before. At the very least.

I couldn't get out fast enough, but not before the short, hairy hunchback showed me his pride and joy: a large tank full of crap, the entire output of the village for the last three months. There were possibly even some of mine in there.

*Bowk*, I said, trying to retain any semblance of composure.

But, alas, it was not over. Not by a long shot. You see, they were desperate to get some culture into us English hooligans, and drove us several hours to the south, where we arrived at the ancient walled city of Carcassonne. And indeed, they cultured us up good but the abiding memory is not of the history and architecture, but of a number of bars willing to serve alcohol to fifteen-year-old English tourists, and the further horrors of hole-in-the-ground shitters.

They were, if anything, worse than the tannery and the sewage works put together, and proof indeed that France will never produce a world-class darts player. I thought I was hardened to the things by now, but, caught short, I followed the example of my peers and pissed against the back wheel of the coach.

Mike Holden, though, was not so lucky. He had a turtle's head on, and nothing was going to stop him from taking a fateful dump. Offering him the best support we could without accusations of being a Gaylord, he found the least soiled cubicle (only three misses, and hardly any used bog paper at all), and set to work.

We waited outside for his triumphant return.

There followed, however, a sickening crash and a scream.

As one, half a dozen teenagers crammed into the toilets to witness a scene from Hell itself.

There lay Mike, trousers and pants round his ankles, soaking wet, covered in crap. Most of which, we surmised, was not his own.

So he had. Caked in shit, piss, and by pulling the flush handle on the way down, completely soaked through. And the smell. There's something about French cuisine that engenders the foulest turds on the planet, and popor old Mikey was covered in them.

"Yaaaaaaaaaaaaaarch!" he said, adding several pints of pissy lager to the stew.

We cleaned him up as best we could, but there was still the problem of a two hour drive back to Mazamet with a reeking schoolboy laid across the back seats of the coach.

And that is why the police pulled us over for travelling with a naked boy. A fiasco. An utter fiasco.
Posted by Alistair Coleman at Friday, February 16, 2007