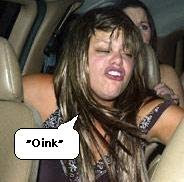 With the sewage outfall that was Celebrity Big Brother Nuremburg Rally Special now fading into hazy memory, it is, I thought, time to re-appraise the phenomenon of celebrity-based TV reality shows.

OK, I'll admit it: I'm all for this kind of programme, and for a very good reason. That reason being that they keep a certain brand of undesirable off the streets an in front of a camera where grown-ups can keep an eye on them. Otherwise, they'd be out harassing tramps with shrieks of "Do you know who I am?" and goosing bored housewives just for the merry hell of it.

My only proviso - and this is the important bit - is that when these shows talk about "sudden death elimination", they really do kill Dr Fox to death for his crimes against entertainment. I'm sure I've read this before somewhere, but it is a concept that will prove how committed to fame these people really are.

The thought of Jade Goody emerging from the Big Brother house, her face contorted like a melted owl as her body is ripped asunder by a hail of bullets fiils me with deep joys, and inspires me to plug a whole slew of celebrity death reality shows to easily impressed TV executives:

And simply because he always manages to escape from these things by dint of being the presenter: