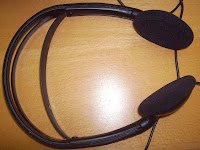 The other week, I wrote a post on this site that ripped the piss out of stage psychics and Most Haunted's Derek Acorah in particular. There are no ghosts, no spirit world. Just dreadful stage fakery and parlour tricks.

So, yesterday evening, as I sat alone in the office writing my latest opus (a jolly exciting novel about Cornish rugger buggers, which will, with a following wind, be available to publishers and literary agents in a matter of weeks - hintussss!), I espied the merest hint of movement out of the corner of my eye.

This building is over 150 years old, but there has been a house on the site for at least 500 years. My office is in the luxuriously-appointed snooker room, which while lacking a snooker table boasts a monstrous plasma TV above the fireplace. There has been, as far as I know, little or no history of spooky goings on, but there are three graves in the grounds, the last remains of sub-editors that dared ask for a raise. There are, I should expect, no reports of ghosts mainly because of the low stupid people ratio in the place.

But there, on the desk next to mine, a pair of headphones began to rise slowly into the air of their own accord. One inch. Two, three, four inches. Then, with a rattle, the dropped back onto the table-top.

At the very periphery of my vision, black figures began to swirl about me, close in, gripping me with cold, cold hands. The window rattled, the lights dimmed and behind me came a terrifying sound, and a smell as if something had died a week ago.

Yes. I was terrified.

And up on the plasma TV, a terrible, terrible vision stared back at me, mouthing soundless oaths. You're a bastard, Jeremy Paxman.

I am not making this up - there must be a logical explanation*. The latest advance in hover headphones, obviously, or an invisible midget. That'll teach me for listening to my Corrupt Uncle's downloaded music.

* And, in retrospect, something to do with the fact that I had been awake for the best part of 21 hours
Posted by Alistair Coleman at Tuesday, February 27, 2007