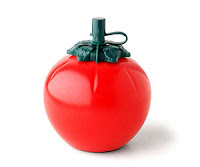 I am an angry man. I am so angry I can hardly go to the toilet properly, and I have found myself quite unable to iron my own underpants. And for good reason, too.

It's not as if I left my birthday list where people couldn't see it: pages 4-14 in the Dorset Echo don't come cheap, you know. But there you go - the entire world chose to ignore this most auspicious of occasions (eclipsed only by Dear Leader Kim Jong-Il's birthday on the following day), and all I have to my name is a box of 40 PG Tips and a partially completed loyalty card for Claire's Accessories. Kim got his own atomic bomb, 50,000 tons of American fuel oil and all the virgins he can eat. Where's the justice?

Before I plan my awful revenge, here is a short list of things I wanted for my birthday but did't get.

It's OK. I am not blaming you, dear reader, for overlooking my day, because you probably had something more important occupying your mind, such as, for example sending a tomato ketchup bottle in the sahpe of a tomato to birthday girl Jane Seymour; or exchanging humourous text messages with birthday boy Matt Groening so he can have a good laugh at his new J. Goody ringtone. I wouldn't blame you in the slightest.

So: you may now confess. What were you going to send me for my birthday, but were unable to because the Royal Mail do not accept live kangaroos?

Email ThisBlogThis!Share to TwitterShare to FacebookShare to Pinterest
Labels: Lists, Things I wanted for my birthday but didn't get