The Awful Truth about the Reverse Cowgirl 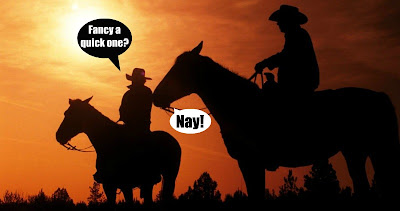 "You DO know," asked Jane, "Why there are so many Westerns in libraries?"

No, I did not know, but before us stood a shelf full of cowboy fiction stretching off into the middle distance.

And I do, grabbing a title called something along the lines of "Encounter at Silver Gulch", and the book flopped open to a well-fingered and suspiciously dog-earred page.

Brett ripped off his dusty waistcoat and leered dangerously at the naked figure of She-Who-Breaks-Like-The-Wind, his forbidden love of the Lakotah tribe. Before they knew it they were...

"Oh Quaid! She simpered, her naked breasts rising and falling, must you really ride out tonight?" Quaid ripped off his dusty waistcoat, and before they knew it...

And yet again, it being a wonder that they ever actually got round to doing any Cowboy stuff back in the Earlies: Cowboy Humpers III - The Adventure of the Rusty Sheriff's Badge

"Oh, Emmy-Jane, said Buddy, "You use your tongue purdier that a two-bit whore." Emmy-Jane was delighted, as the most she had ever charged a man was one bit, and she squirmed with excitement as Buddy ripped off his dusty waistcoat, and before they knew it...

And so on down the shelf, well past the large-print editions which were much the same only louder and battered beyond belief. All except Brokeback, which sat there, unloved and unread.

Email ThisBlogThis!Share to TwitterShare to FacebookShare to Pinterest
Labels: cowboys, the sex