Another letter to South West Trains 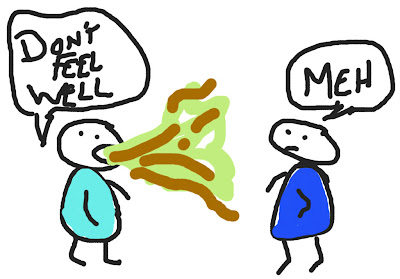 I've just realised that it has been seven months now since I wrote to South West Trains, complaining that their staff had hurried not to help me in any way whatsoever when I fell ill on one of their train services.

After a holding reply to my lavishly illustrated complaint ("We will investigate this matter and will reply within 28 days")' I got nothing at all. Time to up the ante on the non-letter-replying shirkers.

I refer to my lavishly illustrated complaint of 28 June, to which you have not replied.

May I ask why you haven't replied to my genuine complaint? Were you so impressed by my lavish illustrations that you forgot to reply? Did you - despite my identikit picture - even try to identify the staff member who tried to bung me into a taxi and make me somebody else's problem?

Or could you - and I suspect this to be the case - not be bothered and filed my complaint in the bin? 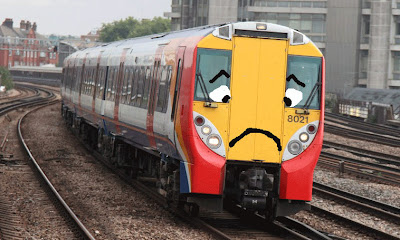 Sort it out, you Premier League Muppets


And if that doesn't get me a free trip to the pie shop, nothing will.
Posted by Alistair Coleman at Monday, February 04, 2013

OMG! After waiting since 11th Sept for a reply about my complaint to SWT I figured there maybe something to Google about it and there you were.
Exactly what is it that their 'customer relations' dept do?? Haven't a clue as no reply having forwarded my e-mails back to them so many times now.
Maybe this so called dept doesn't really exist and the fools on the phone are just bluffing??
I refuse to phone them again as the calls cost me a bloody fortune.
I have left comments on SWT posts on Facebook and messaged them too but still no contact.
Maybe if I do a Sharon Osborne and send them a shit in a box they might just sit up and listen but I doubt it